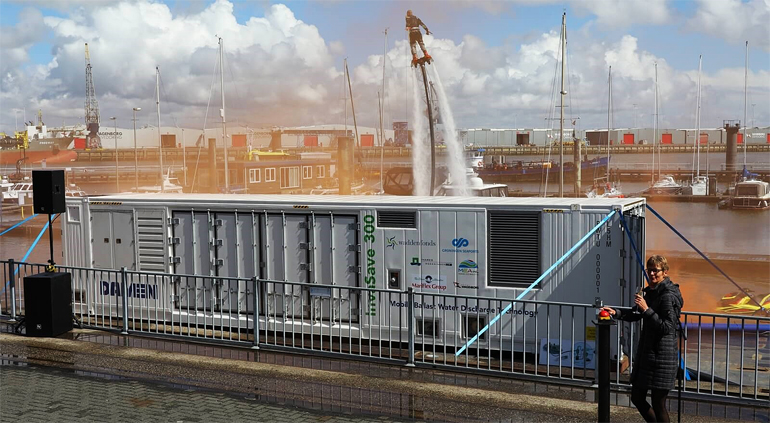 Delfzijl and Eemshaven are the first harbours in the world with a commercial operator that offers the IMO certified ship-to-ship treatment of ballast water.

The port-based InvaSave system has been developed by Damen Shipyard. 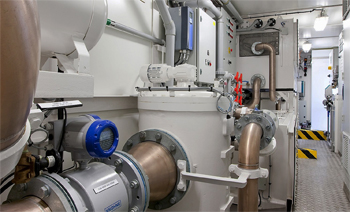 InvaSave is based on continuous fine filtration combined with Ultra Violet treatment.

Port-based treatment
In September the IMO convention for management of ships' ballast water (BWM) will enter into force. It requires international navigating ships to destroy harmful organisms before disposing their ballast water.

Treatment is possible with an on board treatment unit, but as an alternative ports can offer the treatment of ballast water as a service.

First commercial operator
Mariflex is the first operator in the world to offer this port service in the ports of Delfzijl and Eemshaven.

The company operates a pontoon for ship-to-ship operations to connect ships to the InvaSave 300 treatment unit that has specially been developed for this purpose by Damen Shipyard.

Both ports are very close to the Wadden Sea which is a marine protected area. This makes the port authority keen on providing this harbour service, preventing the spreading of non-native species via the discharge of ballast water. 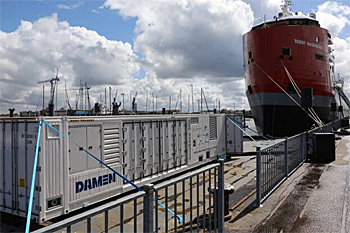 Alternative for onboard retrofit
Philip Rabe, responsible for InvaSave sales at Damen, commented: “We’re delighted that the Damen InvaSave is finally operational in a commercial environment. It is a unique product and, in many cases, it enables ports to offer vessel owners a viable and cost-effective alternative to retrofitting onboard systems.”

According to Rabe, ports now have the opportunity, in the event of failure of an onboard system, to offer owners a means by which they can access ballast water treatment at short notice, ensuring minimal downtime.

Second unit in Rotterdam
The IMO-approved Damen InvaSave is the world’s first external ballast water treatment unit designed primarily for use in ports.

The new unit is now ready for operations at the harbour of Delfzijl and Eemshaven for vessels either without, or with malfunctioning, onboard BWTS capability. MariFlex also plans to have a second operational in Rotterdam ahead of the September implementation of the IMO Ballast Water Management Convention.

This news item was originally published on the website of Damen.

Damen's InvaSave 300 has been developed as a self-sufficient mobile container to treat ballast water, which can be put on board a barge or moved around the port on a trailer, a pontoon.