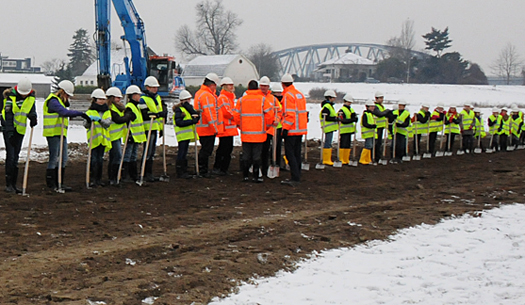 The Dutch public works department Rijkswaterstaat and the city of Nijmegen officially started the construction of a 3 km long side channel next to the river Waal/Rhine.

Minister of infrastructure Melanie Schultz van Haegen attended the groundbreaking ceremony on January 22. Together with 50 schoolchildren and the mayor of Nijmegen, she wielded a spade.

Increased discharge capacity without raising dikes
The construction of the side channel near Nijmegen is part of the Room of the River programme that was initiated by the Dutch national government in 2007 to implement over 30 measures to increase the discharge capacity of the Rhine river from 15.000 to 16.000 m3/s by 2015.

The Room for the river programme breaks the trend of raising river dikes. Higher dikes have the disadvantage that, in case of a flood, more water will flow into the land behind the dike causing more damage.

One of the biggest projects
The project in Nijmegen entails relocating the dyke 350 metres inland in order to widen the river bed. In this widened river bed a 150-200 metres wide ancillary channel will be excavated.

Contractor is Combinatie i-Lent that is formed by Dura Vermeer Divisie Infra and Ploegam. The project costs 350 million euro making it one of the biggest projects of the programme. Budget for the whole Room for the river programme is 2,3 billion euro. 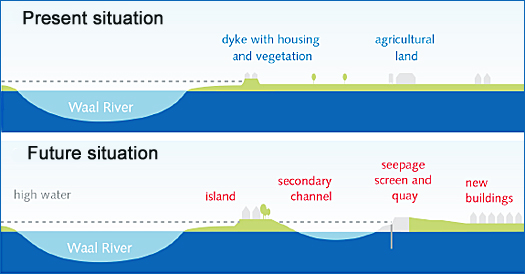 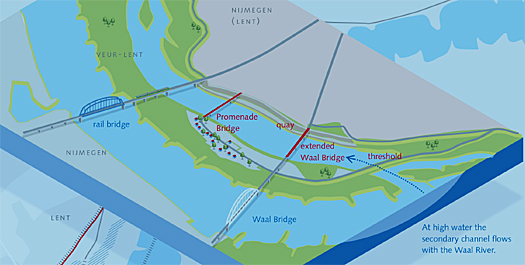 City council as enthousiatic stakeholder
Initially the Nijmegen city council reacted half-hearted to the plan for widening of the river as 50 houses had to be demolished. This attitude changed when talks were initiated on the integration with a city development plan, including the construction of an additional river bridge and the creation of a island with a river park.

The city council got enthousiastic and set up an intervention programme to raise local support for the combined objectives: flood risk reduction and city development.

New city development on north bank
The new river front will drastically change the appearance of Nijmegen. The widening of the river and the excavation of the side-channel and the construction of the island, is planned to be ready by 2016.

The island will be connect the old historic southern waterfront with the new waterside development on the northern bank. This space will be allocated to housing, nature and recreation.

International waterfront awarded
In October 2011 the project won the annual award of the New York-based Waterfront Center. The jury praises the way residents are involved, the innovative balance between flood protection and local development, and the sharing of knowledge with riverside towns in neighboring countries as Germany, Belgium and France.

This news items is based on a press release (in Dutch only) by the Room of the river programme directorate.

Room for the River Nijmegen is one of the participants in the European FloodResilienCity project, joined by seven other river cities that want to combine flood risk reduction and city development.