Dutch minister of infrastructure and environment Melanie Schultz van Haegen was behind the wheel at the groundbreaking ceremony along the Rhine river in the undefended floodplain of Arnhem on January 16.

The undefended river floodplain will be reconstructed as a city park with two parallel high-water channels. With 300 ha the floodplain city park Meinerswijk will be the biggest in Europe.

The construction of the city park is one of the string of 30 measures of the Room for the River programme to increase the Rhine river peak discharge. 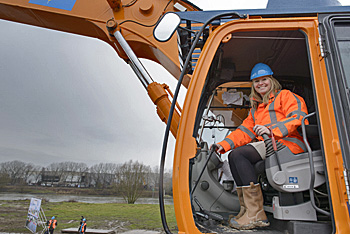 Dutch minister Schultz van Haegen behind the wheel during the groundbreaking ceremony.

By digging out two parallel high-water channels in the undefended flood plains along the Rhine river, the water level drops by 7 cm during a peak discharge.

Most of the time both channels will be dry but at a certain water level the banks of the Rhine river overflow into these parallel channels.

This increases the river's discharge capacity and lowers the water level.

Floodable city park
In consultation with the city of Arnhem, local nature preservation groups and inhabitants it was decided to extend the flood prevention measure and combine it with a full reconstruction of the whole area.

Currently the undefended flood plain of Meinerswijk consists of a number of clay pits from former brick factories. The area will now be transformed in a large floodable city park including new cycle paths, various fishing spots, a bird watch facility, a hand ferry and car parks.

The currently present semi-wild Konik horses and Galloway cows will remain to move free around in the new park.

The present beaver colony will remain in a special preservation area.

According to Rijkswaterstaat the concept of a floodable city park along a river is not new but in the case of Meinerswijk it is claimed to be the largest in Europe.

Famous Bridge too far
The main high-water channel will cross the famous John Frost bridge, named after general John Dutton Frost who commanded the British forces during World War Two that reached and defended the bridge during the Battle of Arnhem in September, 1944. The bridge featured in the film A Bridge Too Far.

Two pilars of this famous bridge will be strengthened to compensate for the lowered ground levels as a result of the excavated high-water channel.

About Room for the River
Room for the river is a national flood prevention programme, comprising 30 projects mainly along the river Rhine, Netherland's largest river.

The programme has two objectives. By giving the rivier more room its discharge capacity will rise from 15.000 m3/s to 16.000 m3/s. Additionally the projects will improve the spatial quality as well, making the river also economic and environmental more vital.

More information
Room for the river
Utrecht, the Netherlands
+31 88 797 2900
www.roomfortheriver.nl