What are you looking for?
News 7 September 2016 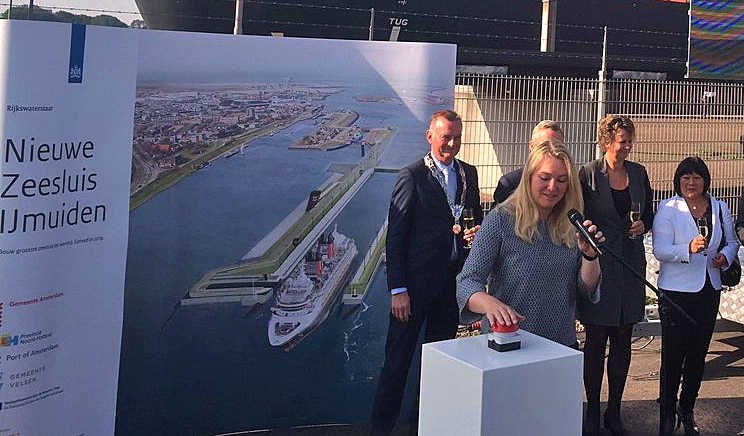 The lock chamber will be 70 meters wide, 500 meters long and 18 meters deep, giving excess to the port of Amsterdam to larger sea vessels. By 2019 when it is scheduled to be ready.

The sea lock at IJmuiden will become the biggest sea lock in the world as it will be 2 m wider than the world's current biggest lock, the Kieldrecht lock in Antwerpen, Belgium.

The responsibility for the construction, as well as 26-year maintenance of the sea lock, is in the hands of consortium OpenIJ, including construction firms BAM and Volker-Wessels and financers PGGM (pension fund) and DIF (investor). The whole project has been budgeted for 815 million euro. 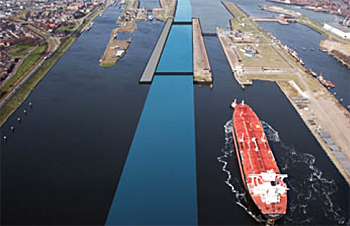 Projection (in blue) of the new lock at IJmuiden in between the existing ones.

Inventive engineering
On occasion of the groundbreaking event minister Schultz said: "This mega project is a wonderful example of inventive engineering. The new lock is built on a very small area between the other locks that will remain open all the time."

"The new lock ensures better accessibility", the minister continued, "to the Port of Amsterdam so it can maintain its position in Europe and possibly become the third largest port in Europe. "

Construction of rolling gates
The lock will have 80 x 55 m roller gates that roll aside as the lock opens. The concrete housing of these gates will be constructed above ground level and then sunk.

This avoids a deep excavation, preventing noise nuisance to the environment and risks to the existing locks.

Only one spare door
Another innovative feature is the similar design of the outside (sea) and the inside (land) lock doors.

This allows that only three lock doors - one spare - need to be constructed. Normally sea locks have a higher door on the outside gate and two spare doors are constructed. 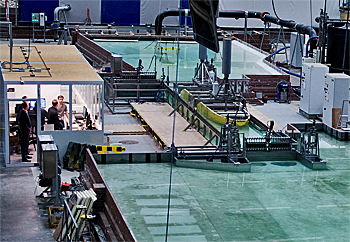 Scale model of the sea lock at the experimental facilities of Deltares in Delft, the Netherlands.

Scale model for validation
Research institute Deltares has used a 1:40 scale model to simulate the operation of the lock to be able to study the fresh and salt water flows.

In detail Deltares also used the scale model to study the required levelling time and the forces exerted on the ships in the chamber during levelling.

The results of the scale tests were used to validate the numerical models used to design the lock.

Iv-Group has previous experiences in roller gates. As a sub-contractor the firm has been involved in the expansion of the Panama canal, being responsible for designing the rolling lock doors and the transmission mechanism.