The sinking of the first pile for a new sea wall marked the official start of work on the National Capital Integrated Coastal Development (NCICD) project, which is aimed at countering the floods in Jakarta, Indonesia.

The NCICD project is a world's first in terms of scale and approach. The works are expected to take 30 to 40 years to complete. The total costs of the NCICD-project are estimated at 10 to 40 billion USD.

The NCICD project is based on a masterplan developed by a Dutch consortium led by engineering and consultancy firms Witteveen+Bos and Grontmij. 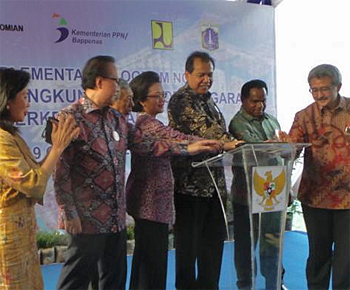 The second phase includes the construction of the Garuda-shaped seawall in the western part of Jakarta Bay, combined with a new city for 300,000 residents and 600,000 workers.

The final phase is the construction of an eastern seawall combined with a port expansion project and a new airport.

The work that has now started is the construction of 8 km long new sea wall at the existing coastline by both the national government and the Jakarta authorities.

The existing flood defences in Jakarta are too low in many places: in October 2013 the sea water level was just 10 centimetres below the edges. North Jakarta has an average soil subsidence rate of 7.5 to 17 centimetres per year, presenting a major risk for the four million people living behind the flood defences.

Improvement of water quality
"The water quality is a critical factor", tells Leon Valkenburg of the Dutch engineering firm Witteveen+Bos. He is the assistant project manager for the NCICD-masterplan. "Some 13 rivers discharge their polluted water in the bay of Jakarta. As a new outer sea wall will close off the Jakarta bay from the sea, the water quality has become a major risk for the second phase of the masterplan. It is very important that in ten year's time the waste water in and around Jakarta will be treated", says Valkenburg. "As part of the masterplan we have conducted studies on the necessary measures to maintain the required water quality improvement in the rivers and the bay." 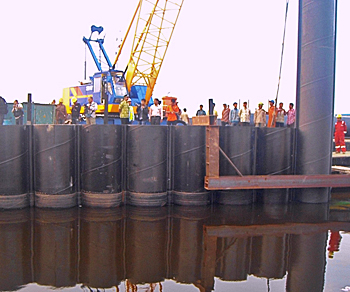 Sinking of the first piles to enforce the current sea wall in Jakarta.

NCICD Masterplan
The Dutch consortium that prepared the masterplan is led by engineering and consultancy firms Witteveen+Bos and Grontmij. The two firms did the hydraulic engineering and urban development project.

The urban design plan was created by design firm KuiperCompagnons, the economic feasibility of the project was analysed by the financial and economic consultancy firm Ecorys, and the hydraulic analyses were performed by research institute Deltares. Local partners are also involved in the project.

The project was made possible in part by the efforts of the Dutch government and water sector, who worked with Indonesian partners to develop solutions for the coastal protection of Jakarta.

The plan was to devote extensive attention to solutions to the city's urban and socio-economic problems, as well as exploring financing options for the hydraulic engineering structures.

The Dutch government also has very active partnerships in Vietnam (Ho Chi Minh city) and Bangladesh (Dhaka) where the partnerhip concentrates on policy making, governance and the writing of a climate adaptation plan.

This news item is based on press releases published on the websites of Witteveen+Bos, KuiperCompagnons, Deltares and Grontmij.