What are you looking for?
News 9 September 2013 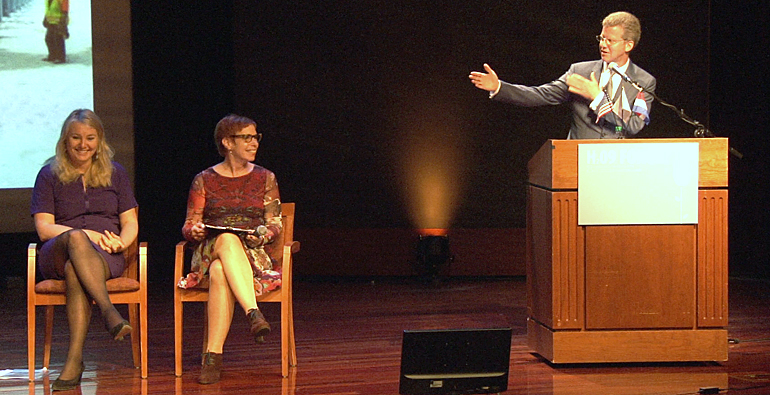 Minister Schultz stated this in her opening speech at the H2O9 Forum in New York on 9 September.

She told her audience that flood protection is about adaptation and should not be simplified to a choice between building a storm surge barrier or abandoning a flood prone area.

US State secretary Shaun Donovan (right on photo) of Housing and Urban development was the other key note speaker at the US-Dutch conference on flood protection.

A giant jigsaw puzzle
"Every new project or challenge leads to new expertise.  And that expertise is useful not only to us, but to the whole world.  Water issues are like a giant jigsaw puzzle.  A jigsaw that we can never finish, because its shape is constantly changing", said Schultz.

"The Dutch approach does not provide all the answers. It is about tackling dilemmas and devising strategies. It is about design, trial and error. That is why Secretary Donovan and I are so eager to invest in each other’s knowledge. To work together on specific areas.  And to foster dialogue and partnership between experts", she added. 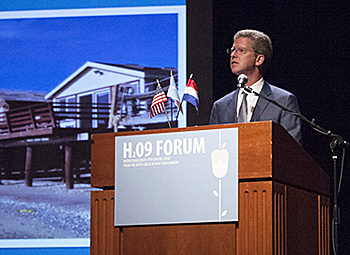 Rebuild the region smarter
State secretary Shaun Donovan mentioned in his key note the great impact super storm Sandy had on him as a native New Yorker. He also reviewed the progess that has been made by the special Hurricane Sandy Task Force.

"First, we addressed the short term needs of the region but we are also firmly focused on the long-term. Our goal moving forward is to help the region build smarter and stronger than before – work that can also serve as a model for communities across the world."

Donovan stressed that the task force isn’t about a response to the next big storm. "What it calls for is a fundamental shift in the way communities here approach future development". 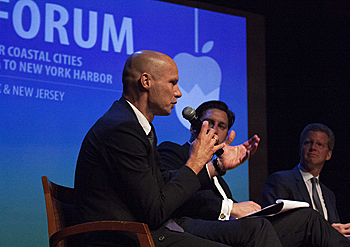 Henk Ovink explained the collaboration between the Netherlands and the US. Ovink works for the Dutch ministry and is assigned to the Hurricane Sandy Rebuilding Taskforce. (photos by Gina Kosty)

A follow up conference in the Netherlands is set for 2015.

About US-Dutch cooperation
Dutch Minister Melanie Schultz van Haegen of Infrastructure and the Environment and US secretary Shaun Donovan of Housing and Urban Development met earlier this year when they signed an agreement, pledging closer cooperation between their two countries on issues related to disaster mitigation, sustainable and integrated planning and water management infrastructure.

Read the news item on this meeting:
- Netherlands, US intensify cooperation on water management, climate resilience and flood preparedness, 5 March 2013