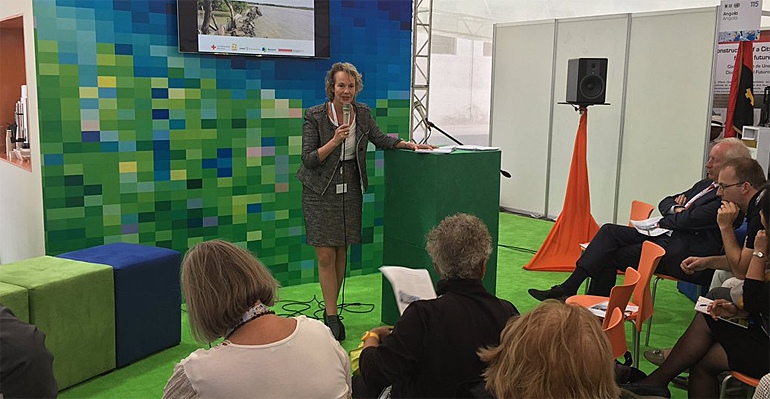 Reduce urban water risks by including wetlands as natural buffers in cities and their surrounding landscapes. This was the message by Chief executive officer Jane Madgwick of Wetlands International at the start of the United Nations' Habitat III global summit in Quito, Ecuador on 17 October. Mrs Madgwick is part of the official Dutch delegation at Habitat III and held her speech during the interactive session 'Working together towards a resilient city' at the Netherlands Pavilion.

Flood protection and fresh water supply
According to Madgwick (on top photo) it is important to consider the spatial scale of a whole river basin of a coastline to understand the risks of water-related hazards, such as floods, droughts and pollution.

At the summit she mentioned the potential key role of wetlands, both to protect cities from floods but also to supply fresh water.

"Wetlands determines the sustainability, opportunities for growth and resilience of cities to a large extent. But their protective and provisioning services – often from far away in the surrounding landscape – are usually taken for granted, until we lose them", Madgwick said. 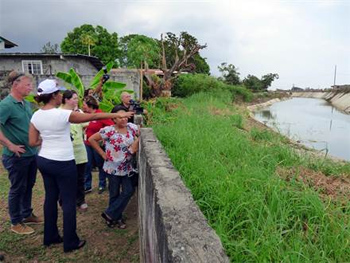 An example of this is low-lying Juan Díaz sub-district of Panama City, where run-off water cannot be absorbed by Juan Diaz floodplains, riverbeds and mangroves, as these have been used for landfills of up to 6 meters or have been disturbed by urban development.

Together with the vice-mayor of Panama, Wetlands International is bringing together all relevant stakeholders – communities, government, private sector – to exchange knowledge and assess scenarios including making room for the river and restoring wetlands and mangroves. 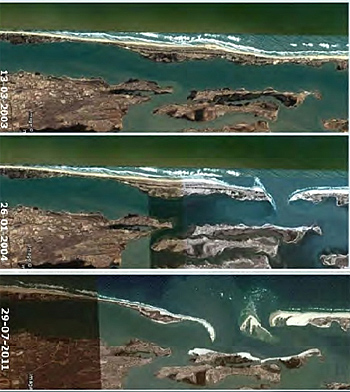 A growing breach in a coastal sand barrier, is part of a complex water problem for the city of Saint-Louis in the Senegal river delta.

Coastal erosion
In a different part of the world, near the mouth of the Senegal river, Saint-Louis has become the city most threatened by floods in all of Africa.

The city is suffering from coastal erosion. While rising waters in the lower Senegal river delta pose flood risks, at the same time its surrounding national parks are turned into desert land.

The delta no longer benefits from an annual flood pulse due to upstream infrastructure. This also puts the food security of local farmers, fishers and pastoralists at risk.

Studies by Wetlands International mapped ecosystem services along the river basin advocate for an approach that combines wetlands restoration and infrastructure.

This news item is based on a news release published on the website of Wetlands International.