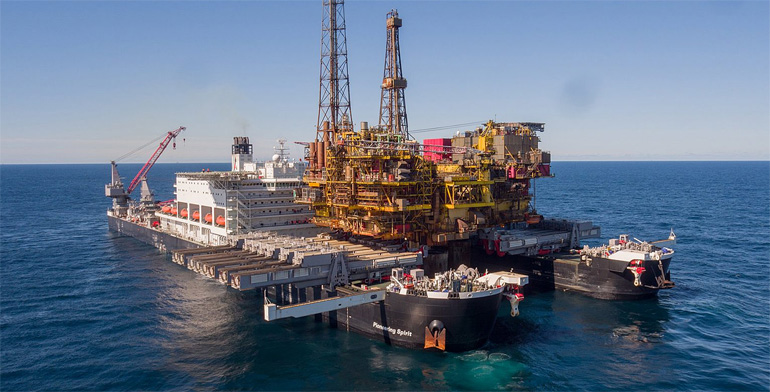 The first of Shell’s four oil platforms in the Brent field, North Sea, has been lifted from its legs for transportation to a scrapyard in the UK on 28 April.

The lifting of the 24,000 tonne topside of the Brent Delta was done by the specialised heavy-lift ship Pioneering Spirit owned by the Swiss-Dutch company Allseas.

The Brent Delta topsides sat on a three-legged structure which stands in 140 m of water. 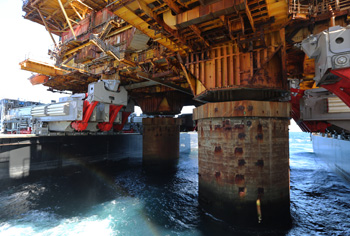 Sixteen yokes (two on photo in grey-red) lifted the 24,000 tonne steel topside from its concrete legs.

World lifting record
It was the second decommissioning job for the Pioneering Spirit. In August last year the vessel lifted and removed the topside of the 13,500 tonne Yme mobile offshore production unit in the North Sea.

This time the topside was much heavier. The topside of the Brent Delta weighs 24,000 tonne, resulting in a single lift world record.

According to Allseas their 382 m long Pioneering Spirit has a capacity to lift and remove topsides of offshore platforms up to 48,000 tonne.

Leaving legs in place
The Brent platforms became an issue of public concern in 1995 when Greenpeace activists occupied one of the platforms, opposing to Shell’s plans to sink the platforms.

Now Shell intends to lift, remove and scrap all four Brent platforms and supporting facilities, including the 30,000 tonne topside of the Brent Alpha platform.

It wants to leave parts of the structures in place, including the concrete and steel legs of the four Brent platforms. Environmental groups as Greenpeace and the World Wildlife Fund Scotland have posed this plan as they want Shell to remove the legs too. 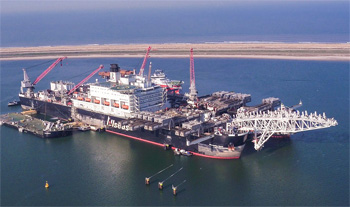 Next assignment for the Pioneering Spirit is to lay a 900 km long gas pipeline in the Black Sea. A special ‘sting’ (in white, right) to guide the pipe-laying was tested on the vessel in the Rotterdam harbour in March.

The topside of the Brent Delta oil platform was sea-fastened on board the vessel and transported to Teesside, UK. There the structure was transferred to a barge that will bring the structure into the river Tees and to Able Seaton Port.

Ultimately Shell’s aim is to recycle 97 percent of the Brent Delta topside.

This news item is based on press releases published on the websites of Allseas and Shell UK.