High level panel on water: Catalyzing actions to get water issues at top of political agenda 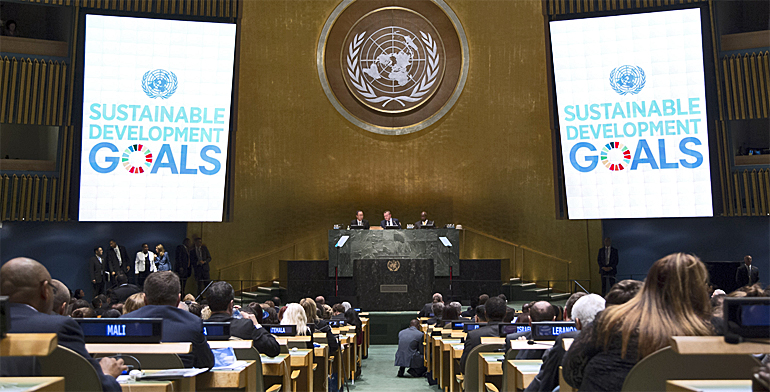 The High Level Panel on Water, formed by the World Bank and United Nations, took the opportunity of the UN's annual General Assembly meeting to launch its action plan in New York on 21 September.

The Action Plan sets out for a new global conversation on valuing the water needs, recognizing the need for better water governance and more finance for sustainable water services.

On five specific global water issues the panel disclosed a number of actions to catalyse existing global networks in order to get water issues higher on the political agenda. 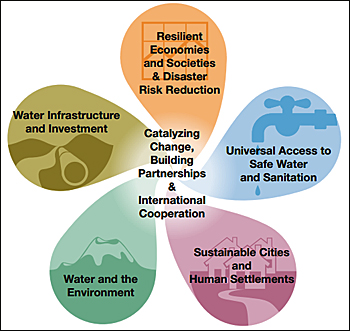 Five issues that the HLPW panel wants to address the coming two years.

Global initiative
In a Joint Statement the Panel, which is jointly convened by UN Secretary-General Ban Ki-moon and World Bank Group President Jim Yong Kim, recognized both the human right to safe drinking water and sanitation, and the need for all to take responsibility for managing water better.

On the occasion Ban Ki-moon emphasized the importance of the panel taking a global initiative and mobilize action to achieve the Sustainable Development Goal #6 on water.

"If the world continues on its current path, projections suggest that the world may face a 40 per cent shortfall in water availability by 2030", he remined.

"The panel can help mobilize the urgent action needed for ensuring the availability and sustainable management of water and sanitation for all," said the UN secretary general.

No water, no economic growth
World Bank Group president Jim Yong Kim noted that doing nothing is no option. “The consequences of water shortage are costly today, but will be exponentially more expensive in the future.”

“Economic growth in some regions could be cut by as much as 6 percent because of water scarcity alone", Young Kim warned. 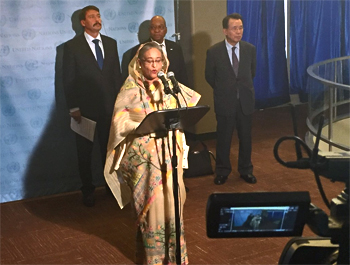 Act together
The High level panel on water consists of 11 sitting Heads of State and government and one special adviser. One of the participating head of states, is Dutch prime minister Mark Rutte.

In his reaction the Dutch prime minister also mentioned the relation with economic development. “Water is critical for development. But too much, too little or too polluted water puts a break on development. This is what ever increasing numbers of people experience all over the world."

"Government and business leaders, academics and civil society must act together. None of us can solve this alone. We need to tackle tomorrow’s water challenges today. We have no time to waste!", Rutte said.

New water agenda
The panel's approach is multifaceted and seeks to relate the water issues to the rapid development of cities, human rights, social inequity, increasing number of natural disasters and declining nature.

The action plan invites existing networks to 'shift the needle' and establish a 'new water agenda'.

The panel announced four initiatives for immediate action:
● to increase the attention to water in the climate action plan that will be discussed at the COP22 in Marrakesh, Morocco in November
● to stocktake innovative financing mechanisms, for water and sanitation services and infrastructure
● to organize challenge events at global non-water related conferences, such as Habitat III and the World economic forum

In addition the panel suggested to launch a challenge on innovative solutions for clean water and adequate sanitation for women in remote dwellings.

Another topic the panel wants to address, is the allocation, valuing, pricing and trading of water. It is suggested to develop a new methodology for valuing water, building on the human right to water and sanitation.