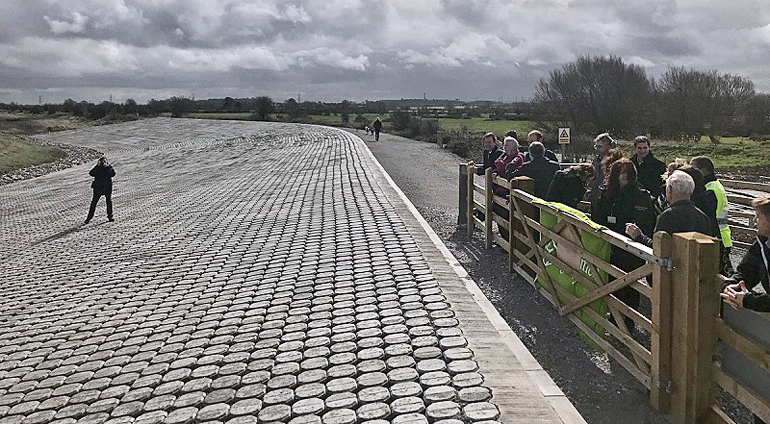 The tiny coastal community of Stolford has become the first location in the UK to benefit from the special shaped concrete Hillblock, used in a revetment to stop the coastal erosion.

The Hillblock is made from high density concrete and held in place by steel piles and concrete kerbs. Although extremely heavy, each block is designed to move slightly to absorb the energy from the waves run-up.

The revetment with the Hillblock flood defence system was officially unveiled (see on top photo) on 18 March in the presence of John Curtin, Executive Director of Flood and Coastal Risk Management at the Environment Agency and Simon Smits, Dutch Ambassador to the UK. 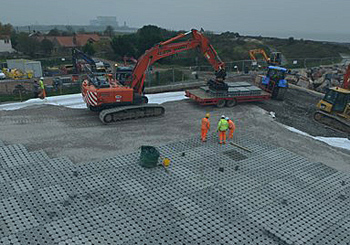 The revetment near Stolford, UK, under construction.

There are already coastal defences between Stolford and Hinkley comprising of rock armour and an embankment wall. These defences adjoin a shingle ridge that was prone to serious erosion.

Beach replenishing
Rising sea levels and more extreme weather conditions have made the ridge and embankment increasingly vulnerable to erosion and increased the risk of a breach.

The Environment Agency previously spent 50,000 UK pounds a year replenishing the ridge with 15,000 tonnes of shingle.

Conventional rock armour, also known as rock revetment, would have been too costly and visually intrusive. In addition, the transportation of rock armour would have caused excessive disturbance from heavy lorries travelling in narrow lanes to a remote coastal location. 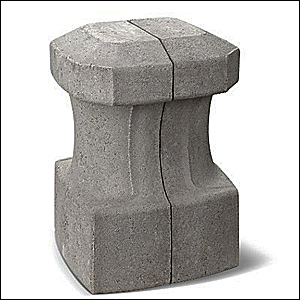 Mushroom-like shaped Hillblock with large openings under the head that damps wave power. The block is manufactured in two halves, making it easier to manufacture and for the shelves handier to put in place.

Reducing wave run-up
The Environment Agency decided the best solution was to construct a revetment with the Dutch system known as Hillblock that uses a series of specially-shaped concrete blocks.

John Curtin, Executive Director of Flood and Coastal Risk Management at the Environment Agency, said: "This is an exciting engineering first for UK – the new technology installed at Stolford can reduce wave energy by up to 30 per cent compared to the shore protection traditionally used."

"It will provide valuable protection to this Somerset community and the surrounding agricultural land", Curtin added.

The revetment has been constructed by Team Van Oord, a Joint Venture partnership between Van Oord, Kier, Mackley and Royal HaskoningDHV .

The Hillblock system has been tested extensively. Here seen in the Delta Flume at Deltares, the Netherlands in 2011.