Hippo on the river Thames

Dutch artist Florentijn Hofman made a grand entrance to the UK by floating a gigantic hippo sculpture down the River Thames.

The nearly 21-metre-long replica of the water mammal – named HippopoThames – was commissioned by the Thames Festival Trust, which had approached Hofman to design artwork for Totally Thames, an annual festival celebrating the river.

The sculpture is anchored at Nine Elms on the South Bank in London, remaining there until September 28 when the Totally Thames celebration comes to an end.

The giant hippo is Hofman's a follow up to his famous inflatable duck. 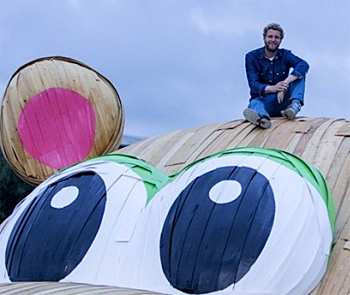 Large creatures
Earlier this year, Hofman was asked to create a piece of artwork by the organizers of Totally Thames, an annual festival that celebrates London's famous river.

He said he started by researching the history of the river, and eventually came across studies on hippo evolution that revealed its waters were awash with the large creatures hundreds of thousands of years ago.

The result was an artwork he's christened with a pun almost as heavy as one of the beasts he's been studying: 'HippopoThames.'

"I wanted to use the hippo to get people out of their homes, away from the Internet and the TV, and to explore London with a new perspective", Hofman told the British media.

Enormous rubber duck
Hofman is known for his super-sized, colorful works of art, most recently the enormous inflatable rubber duck that floated around the waters of cities like Hong Kong, Sao Paulo, Auckland, Norfolk, Amsterdam and Osaka.

"After the rubber duck it was hard to come up with another water-related installation," he says. "People just want another duck!"