Until the 1st of April, the apps are available for free. 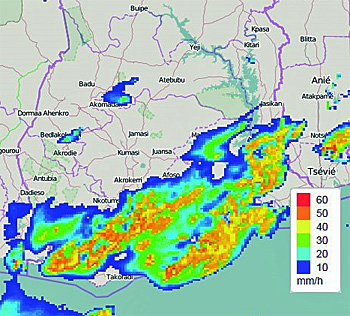 A rainfall event along the coast of Ghana.

Rainfall intensity
Rainsat shows the rainfall intensity from the previous 4 hours up to now and helps the user to see if more rain can be expected in the imminent future.

The app is obviously useful for water managers or farmers, but also enables citizens to make informed decisions on their weather-related activities.

Until the 1st of April, the apps are available for download free of charge from the stores of Apple and Android, search for Rainsat.

About Rainsat
The images presented are derived from geostationary Meteosat observations that are collected in 15 minute intervals.

During daytime, rainfall information is obtained from visible satellite channel observations, while during nighttime the observed cloud temperatures from the infrared channels are used. Extrapolation of the rainfall patterns provides information for the next few hours.

See the actual rainfall in Ghana, Ethiopia, Malawi and Mozambique as a web application on www.rainsat.net.

This news item was originally published on the website of HKV.