Water technology company Holland Water signed a partnership agreement with Octo Marine, a French company specialized in water treatment for yachts. The two companies will jointly market Bifipro Marine, a copper and silver ionization filter for the removal of bacteria and biofilms in water. The signing took place in Cannes, France on 19 November. 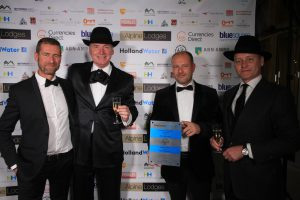 The treatment supports the prevention of infection from pathogenic bacteria such as E-coli, Pseudomonas aeruginosa, Enterococci, and Legionella and maintaining the systems biological quality.

Accurate dosing
Director and owner Leo de Leeuw of Holland Water: “Octo Marine finds it important that we conduct our own research and development, and that we are constantly working on new developments”.

"Therefore, our BIfipro-system is technically the state of the art in accurate dosing of the right copper and silver concentrations in the water", says de Zeeuw. 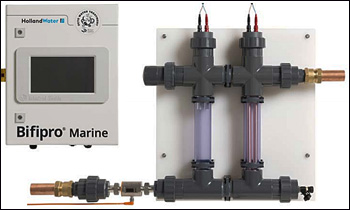 Extremely compact
Holland Water and Octo Marine have jointly developed a system specifically for use on ships. The Bifipro Marine is extremely compact and has a system that allows remote monitoring, even on the high seas.

De Zeeuw: “Our existing systems have been developed for application to land. Now we have a version that meets the specific requirements for ships.”

To combat legionella it is generally advised to flush the hot water pipes and tapes with water at 60 degree Celsius every week for 20 minutes. However, this is very energy-demanding and Bifipro provides a good alternative.

Holland Water has already Bifipro-systems operational at more than 350 locations in the Netherlands, Belgium, Italy and the Middle East.

This news item was originally published on the website of Holland Water (in Dutch only).