US Department of Housing and Urban Development (HUD) Secretary Shaun Donovan announced on 2 June that six design proposals have been selected as winners of HUD’s Rebuild by Design competition.

HUD is allocating approximately 920 million USD to New York, New Jersey, and New York City to begin implementation of the winning projects that will make the region more environmentally and economically resilient.

Spur innovation around the world
"The winning proposals are truly transformative and serve as blueprints for how we can safeguard the region and make it more environmentally and economically resilient", said Secretary Shaun Donovan. "It’s my hope that Rebuild by Design will inspire other public-private partnerships to spur innovation and resilience in other parts of the country and around the world. By investing in these proposals, we are going to ensure that when the next storm comes, the region will be safer and better prepared." 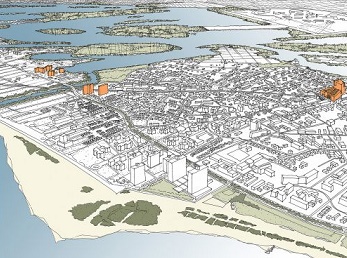 Living with the bay proposal by the Interboro team for Nassau county south bay.

New standard of resilience
"Rebuild by Design’s process took ten interdisciplinary design teams on an in-depth journey through the region, working with and within the communities, discovering the region’s vulnerabilities and interdependencies to focus on the opportunities for a new standard of resilience," said Henk Ovink, Principal of Rebuild by Design, Dutch Government Liaison to Hurricane Sandy Rebuilding Task force and Senior Advisor to Secretary Donovan.

"Through this collaborative design process, the teams delivered innovative solutions that bridge the gap between social and physical vulnerabilities", Ovink continued.  "I am so proud of these teams, the communities and their partners for giving the region a new way forward. They showed that this is not about making a plan, Rebuild by Design is about changing a culture."

Blueprints
The winning proposals come from six interdisciplinary teams representing some of the best planning, design, and engineering talent in the world. These inventive proposals are a blueprint for how communities can maximize resilience as they rebuild and recover from major disasters.

HUD chose the winners for their excellence in design and resilience and their engagement with local communities. These ideas will serve as a model for how we can mitigate the effects of climate change and natural disasters in communities throughout the Sandy region, the United States, and the world.

Locally-responsive proposals
Rebuild by Design was created in the summer of 2013 by President Obama’s Hurricane Sandy Rebuilding Task Force as a way to develop ideas capable of dramatically improving the physical, ecological, and economic resilience of coastal areas.

Teams worked to create coalitions with local and regional stakeholders to develop locally-responsive proposals to improve the resilience of waterfront communities.