“We have calculated that New Jersey needs 8 to 14 feet high sea walls to defend itself against future floods. By mitigating and delaying the storm surge, levees up 4 to 7 feet high are sufficient and additional local measures can be taken. This opens a perspective for insurance companies to step in”, director Adriaan Geuze of West8 Urban Design & Landscape Architecture said at the opening conference of the sixth edition of the International Architecture Biennale Rotterdam (IABR), the Netherlands on 29 May. 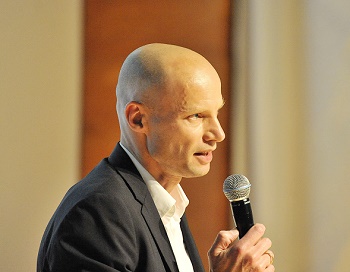 Moderator of the conference, Henk Ovink.

The conference was moderated by Henk Ovink, principal of Rebuild by Design and Senior Advisor for United States Secretary Shaun Donovan of Housing and Urban Development and the Hurricane Sandy Rebuilding Task Force.

Stakeholders and designers talked about options to reduce the vulnerability of New Jersey for extreme rainfall or floods. 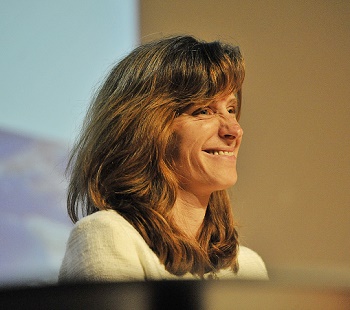 More downpours in Hoboken
Mayor of Hoboken Dawn Zimmer recalled the 80% flooding of her city on the west bank of the Hudson. “Since Sandy we have had five more floods. What used to be heavy rains, are now downpours”, said Zimmer at the IABR in Rotterdam. “Two third of the city is a FEMA flood zone and it is difficult to benefit from that and create new opportunities. We need a comprehensive approach”, she told her Dutch audience.

Teams that participate in the Rebuild by Design competition had the opportunity to show their solutions. Nanco Dolman of Royal HaskoningDHV, representing the OMA design team, explained his team's idea for a green-blue belt to prevent future floods in Hoboken. The extra water storage capacity of this belt, in combination with a small elevation of some levees and additional pump capacity, could by such a comprehensive approach.

No sea walls, but wetlands and bike tracks
The team presentations made clear that the designers looked away from massive high sea walls and instead focused on possibilities for water storage and flood delays, in combination with new land use for recreation or nature conservation. The influence of the Dutch designers was paramount as many ideas included wetlands and bike tracks. 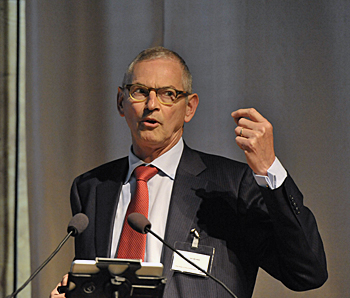 Frans van de Ven of research institute Deltares unfolded the key points of the Dutch approach that not only includes floods, but also drought and heat stress. All are related to water, he said.

Consultation with local communities
Jeremy Siegel explained the ideas of the BIG team, including the Dutch consultancy firm Arcadis, that is working on tailor made solutions for flood mitigation in Manhattan. Siegel told that in consultation with the local communities many possibilities have been explored, including new light rail transportation lines along the embankments, new ferry landing pavilions, parks and even a reverse aquarium, a building with a water-facing ground floor where visitors can look underneath the sea level and watch tidal variations.

The International Architecture Biennale Rotterdam (IABR) in Rotterdam, the Netherlands will be open to the public until August 24. In June more conferences will take place related to the 'Dutch approach' of integrated urban water management, such as Infrastructure of the smart city (5 June), Urban deltas in transition (13 June) and Building with Nature-Ecoshape (19 June).

The ten design teams that participate in the Rebuild by design competition presented their final proposals in New York on 3 April. The teams unveiled their ideas to improve the resiliency of coastal communities affected by Hurricane Sandy. A jury is about to announce the winning team.