IABR2016: How to avoid too many supermarkets on fertile river delta soils? 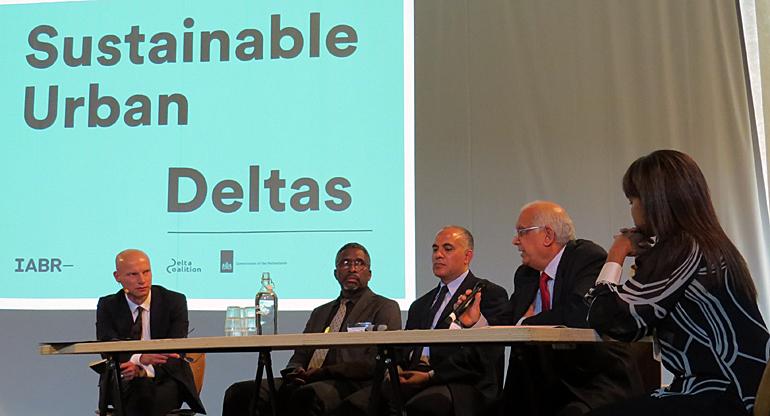 Many coastal cities are economic hotspots with large seaports serving the hinterland. As these cities expand to accommodate more people, they cause the loss of fertile river delta soil for food production. Ironically the supermarkets - built on this fertile ground - face more costs as food has to be transported from further away. The same goes for the supply of fresh water.

The bigger the city, the longer its supply lines. At the conference Sustainable Urban Deltas this development was addressed as old logic. 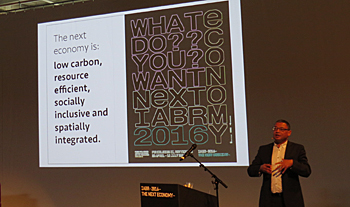 “It is an economy with profit as the only driver. The problem is that economy is spatial blind”, stated director Edgar Pieterse of the African Centre for cities.

Pieterse advocated citizens to get more involved in the spatial planning of their neighbourhoods.

The conference Sustainable Urban Deltas took place in Rotterdam, the Netherlands on 9 May. It was part of the gathering of the participants of the Delta Coalition, a global platform of governments to address the integrated management of river deltas that are extremely vulnerable to climate change.

The Delta Coalition is to hold its first ministerial meeting on 10 May, also in Rotterdam that is part of the Adaptation Futures 2016 conference. 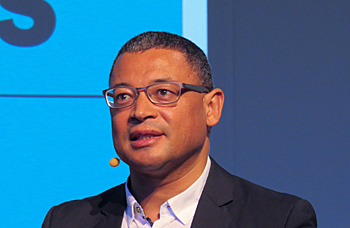 Director Edgar Pieterse of the African Centre for cities advocated citizens to get more involved in the spatial planning.

More intelligent urban growth
Pieterse advocated to build more on social capital and make it engage with the business community. This leads to new investment portfolios with more added value to the city as a whole.

“Much of today’s infrastructure in Africa is not bankable. Is it possible to change the criteria and develop new models so more money becomes available for new infrastructure and connect them to services to make it work?”, he asked aloud, suggesting more smart integrated public-private investing.

Looking for local connections
Several speakers at the conference warned for engineered urban solutions that solve only one issue. Director Adriaan Geuze of West 8 landscape architecture showed that even the Netherlands is not immune for the negative consequence of such one-problem-approach. As an example he mentioned the building of the Amsterdam railway station in the late 19th century.

“It was a historic mistake to let the railway engineers prevail and build a station right on the waterfront, isolating Amsterdam from its roots, losing the historic view on the lagoon." Geuze criticized the decision to transfer Amsterdam from a waterfront city into an inland city. 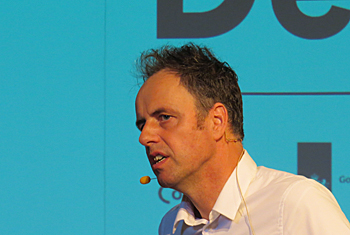 Director Adriaan Geuze of West 8 landscape architecture wanted an end to the madness of one-problem solutions.

Stop the madness
As a landscape architect he also sharply disapproved the highways along the waterfronts of many US and Canadian cities. “This madness of one-problem-solutions is an amputation of places where land meets the ocean or river."

He advocated to include the cultural aspects of individual cities. "Ask yourselves why the city is there and what makes the people proud of it".

“We must learn from these mistakes and move away from the one-problem-solutions. Include more subtleties and pile the solutions in an overall programme", Geuze suggested.

Timing is crucial, he believed: "Wait for a big project to get defined and then organise a clash for subtleties by involving citizens, writers, artists and scientists". 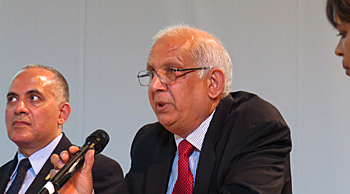 Bringing prosperity
"Urbanisation is not a problem. It can bring prosperity", said Kumaresh Chandra Misra, deputy secretary-general of the UN Habitat III conference on Housing and Sustainable Urban Development to take place in Quito, Ecuador in October this year. Habitat III is to adopt the new urban agenda.

"Urban management must include economic growth, employment, spatial planning, and development of legal frameworks", said Misra. "Let us broaden up the scope of funding and look beyond the financing of individual urban projects by developers. If cities can agree on a development plan, they can welcome the estate sector and invite them to align their projects with this plan". 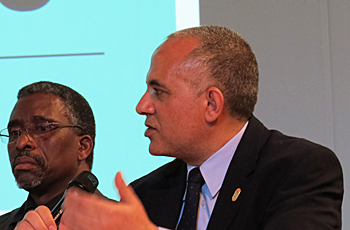 At the closure of the conference Kumaresh Chandra Misra participated in a panel (on top photo) to wrap up the main findings of the conference, together with vice major Raisa Banfield (right) of Panamá City, Egyptian minister Mohamed Abdel Aty of water resources and irrigation, and Mozambique minister Carlos Bonete Martinho of public works, housing and water management. Moderator was special Dutch envoy Henk Ovink (left) for international water affairs.

The conference took place in the former coffee warehouse Fenixloods II in Rotterdam, the Netherlands, where the seventh edition of the International Architecture Biennale Rotterdam (IABR) is being held till 3 July.

This year's theme of the exhibition is The Next Economy.