IAHR2015: Next challenge is to engineer nature-based flood defences 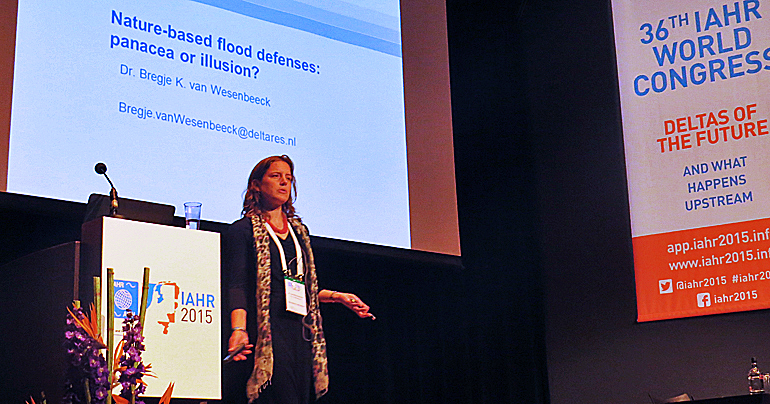 Worldwide there is an indisputable development towards more nature-based flood defences, noticed Bregje van Wesenbeeck of research institute Deltares. The challenge is to engineer natural structures such as tidal marshes, mangrove forests, sand dunes and oyster reefs in such a way that they are reliable under extreme conditions as well.

Van Wesenbeeck was a keynote speaker on the opening day of the IAHR world congress on 29 June.

Over 1400 hydro-engineers from all of the world have gathered at the 36th edition of the annual world congress of the International Association for Hydro-Environment Engineering and Research (IAHR) in the Hague, the Netherlands. The congress lasts till Friday 3 July. 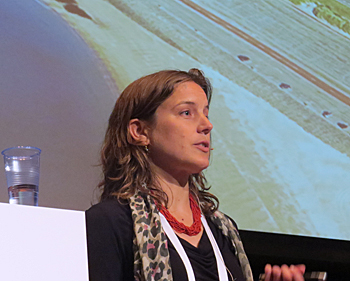 Enormous potential
In her keynote Van Wesenbeeck disclosed that much research is currently taking place to enable engineers to construct flood defences that use nature-based solutions in combination with hard flood defence structures.

She gave several examples of severe flood events in the world, where there has been no immediate response to build higher levees.

As a Dutch expert on flood defences this surprised her in a way, she admitted in her keynote. On the other hand she is an expert on nature-based flood risk mitigation at Deltares, so she is very much aware of the enormous potential of soft flood defences such as mangrove forests, tidal marches, sand dunes and oyster reefs. 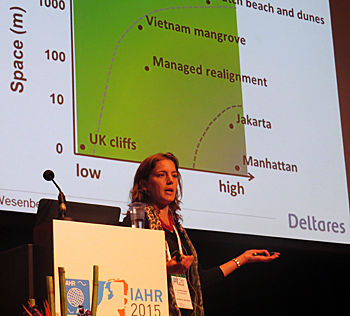 Van Wesenbeeck showed a matrix of locations with low-high risk and little-much space.

Neither a panacea…..
Are nature-based flood defences a panacea or an illusion? That was the central question in Van Wesenbeeck's inspiring presentation on this new phenomena.

She pointed out that these kind of flood defences are no panacea. Mainly because they require much space which in many cases – especially in urbanized areas – is not available.

... nor an illusion
Yet they are not an illusion, Van Wesenbeeck assured. “Natural systems such as mangrove forests, can be prefect breakwaters. Not only nice to look at, but they can be very useful in flood risk mitigation", she told the fully packed room. She showed results of experiments with grass vegetation in tidal marshes that lead up to 25 percent wave reduction.

Van Wesenbeeck also mentioned the possibility to combine hard and soft structures. Her good news was that models show that natural systems reduce wave energy to a certain level. "This remaining level is very constant which makes it easier to design a hard structure to reduce the remaining flood risk".