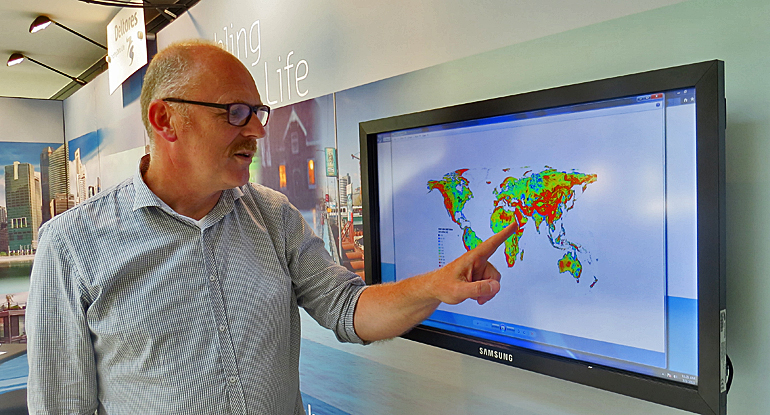 “In many parts of the world groundwater use has surpassed natural groundwater recharge, leading to strong drops in groundwater tables. As deep groundwater takes longer to refill the aquifer is in fact being depleted ”, warns Harm Duel, manager of the groundwater department of research institute Deltares at the 2015 IAHR world congress.

Over 1400 hydro-engineers from all over the world gathered at the 36th edition of the annual world congress of the International Association for Hydro-Environment Engineering and Research (IAHR) in the Hague, the Netherlands. The congress took place from 29 June till 3 July. 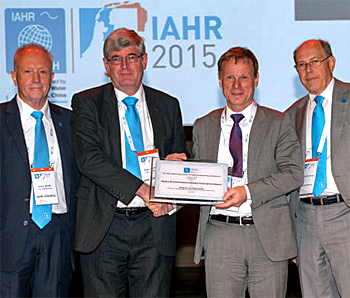 Awarded for open software
At the congress Deltares was awarded the IAHR Industry Innovation Award for its Open Source Software initiative. One of the software programmes that Deltares shares freely with the water community is iMOD, a graphical user interface that can model and visualize groundwater flows, from local to global scale.

At the Deltares booth Duel shows on a map where in the world the water tables are deep below the land surface (red on top photo) and where it will be difficult to use groundwater as a sustainable water source.

“We believe that this kind of information about groundwater resources is key to solving the problem of future water scarcity under a growing population."

"The visualisation of groundwater flows",  Deul continues, "helps governments and companies to determine how much fresh water is available and how long it will last."

Dried up rivers and lakes
The decline in groundwater availability results from over-extraction for human demand but also because of meteorological droughts. 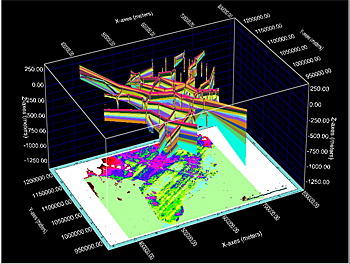 In iMOD it is easy to adapt the geometry, depth and extent of an aquifer when groundwater modellers generate new feedback.

Part of the solution
So the good news is that Duel believes aquifers are part of the solution. “Many dams in the world have been built to create reservoirs that can supply irrigation water to local farmers. However the effective space for dams is limited, and much of the water from reservoirs evaporates”. Therefore Duel advocates to store more fresh water in the underground. “This water does not evaporate and has the advantage that it takes up less space, which is especially relevant in densely built urban areas.”

Land subsidence
Duel points out that water scarcity and groundwater depletion also have a large effect on hydrological engineering in a more indirect way . “In many of the world’s major deltas, groundwater extraction leads to soil subsidence. It all starts with a few extraction wells with hardly any effect , but a concentration of many extraction wells has serious impact. It will not only lower the groundwater table so wells have to be deepened. In many areas around the world a concentration of many wells has led to serious land subsidence, which causes damage to infrastructure and increases the risk of river and coastal flooding."

"Current global groundwater data is mainly based on satellite images and water balance studies", Duel remarks finally. "The global model and our software is open to all parties and enables us to predict the effects of groundwater abstractions, climate change and water management scenarios all over the world."

Read also on this website
● IAHR2015: Next challenge is to engineer nature-based flood defences, 30 June 2015
● World gathering of hydro engineers at IAHR World Congress 2015 in The Hague, 30 June 2015