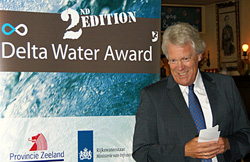 Wim Kuijken, Delta Commissioner and chairman of the Delta Water Award jury, announced the five nominees. According to the jury the Royal Haskoning/Wageningen University idea offers concrete opportunities for linking economic (port) development to nature and the environment while at the same time addressing a current issue.

The team will start by making a 'Sustainable Delta Toolbox’. In addition, the team will be working on a concrete plan for the development of the position of the two sea ports in the long term. Our team has taken the jury's remarks to heart and will discuss the plans with Zeeland Seaports and other stakeholders in the region. The challenge is to bring the idea further by showing its economic feasibility and viability, and to show its potential of giving a boost to the region.

There were 16 entries in total. The five nominees have been given until 1 February 2012 to develop their ideas into concrete plans.

The Delta Water Award challenges students and young professionals to develop concrete innovative and sustainable projects which will contribute to the economic development of the south western Delta.