Dutch companies IF Technology and DeltaSync won the Sustainable Urban Delta Awards 2014. The awards were handed out on the occasion of the Clean Tech Business Day in Rotterdam, the Netherlands, on 9 December.

The Sustainable Urban Delta Award is an award for Dutch companies that offers an innovative solution for challenges in urban delta cities that - located in low lying, densely populated coastal areas with large river estuaries - are faced with big impacts of climate change. 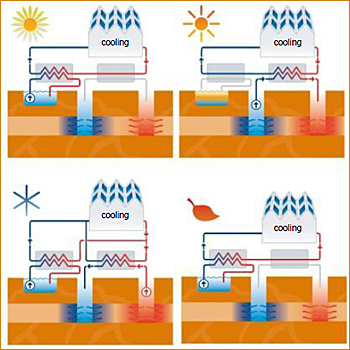 The  thermal energy storage systems uses the temperature differences in the surrounding surface water. During the summer the heat in surface water is used as a primary energy source for heating buildings and hot tap water by means of a heat pump.

By storage of the relatively warm surface water in the soil by an aquifer terminal storage system (ATES), the heat of the water can be used during cold winter months. 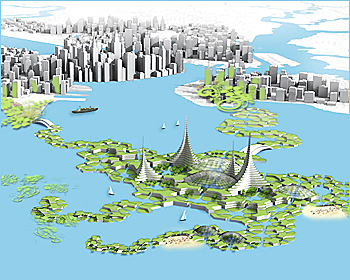 Concept of a floating city that includes large aquaponic systems to produce algae for food and energy supply for the land-based city.

Best concept: first floating city
DeltaSync received the award for its concept Blue Revolution, the first floating city in the world. The city is self-sufficient in terms of water, energy and food supply. Water is either collected through rain water harvesting or can be drawn from the large reservoir on which the city floats. Positioning the city on a large body of water also provides opportunities for implementing thermal energy storage systems. Large aquaponic systems can produce algae for food and energy supply.

DeltaSync has done several design and feasibility studies, including one for the US-based Seasteading Institute that wants to establish communities living on the oceans. The firm also supports the Blue revolution that is based on floating food cities, using the nutrients wasted by conventional cities, to grow algae, fish and crops.