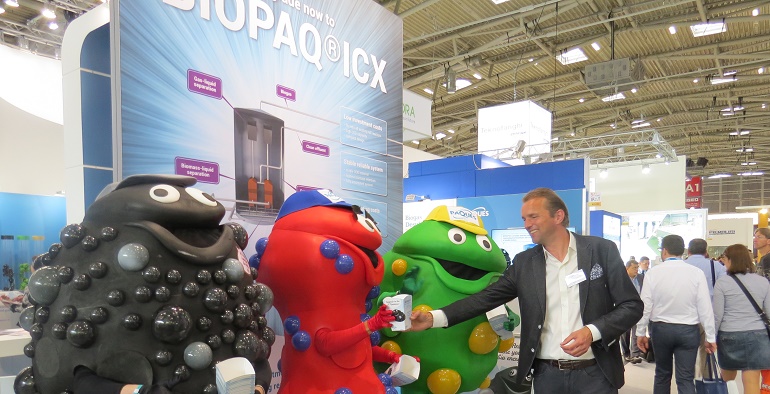 The Biopaq ICX is a modular system, enabling a more flexible design of the reactor tank. The classic IC-reactor, of which Paques has sold over 1,000 worldwide, is housed in a standard 21 m high reactor.

The modules of new ICX-version can be housed in a much lower tank, should this be required. Depending on the loading rates of the waste water one or more modules can be used.

The Biopaq ICX modules can also be housed in an existing tank, making the new ICX-technology also available for the retrofit of existing anaerobe waste water treatment plants.

This first Biopaq ICX installations are already operational for handling industrial waste water. One of the installations is at the paper mill of Allard Emballages in France where the Biopaq ICX has increased the biogas production by 32 percent. 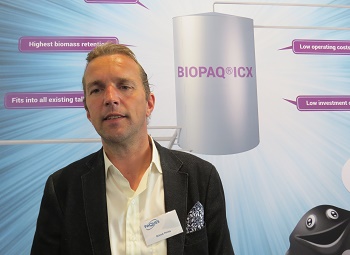 Better performance
“This increase has not been achieved by only implementing our ICX units”, admitted Rienk Prins, process specialist at Paques. Prins worked on the idea of a modular concept for three years now and at the IFAT trade fair he explained the advantages.

“In the case of the French paper mill the existing treatment plant was performing poorly, facing much clogging in the system and the continuous loss of biomass. We rebuilt their plant, using many existing parts, and installed a modular ICX-units. Given the size of the tank it can handle higher loading rates. As the plant performs much better now, we have been enabled to boost their biogas production”, Prins told.

The ICX-units at the French paper mill are already operational for a year now and according to Prins they have proven to recover more biogas and use less chemicals. 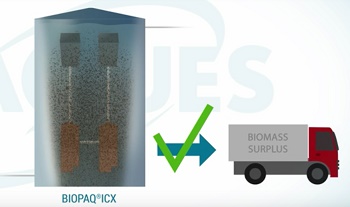 Combining two worlds
The new ICX-version allows Paques to offer its industrial clients to improve their existing plant and not necessarily buy a complete new installation. “In fact our modular ICX-technology combines the best of two worlds”, added Prins.
“We can offer the flexible design of the EGSB-technology, in combination with the high performance and care-free operation of our ICX-technology”.

Changing the internals
As an example he mentioned the retrofit of an existing waste water plant at an Hungarian paper mill. “Here we are replacing their EGSB-system and we can fit four ICX-units in their existing reactor. We just remove the roof and install our new internals. Many reactor tanks are made of stainless steel that can last over hundred years. Our new ICX-technology allows us to offer an extensive upgrade using the existing reactor tank.”

Paques is present at the IFAT with its three colorful bacteria (see top photo, being provided with pop corn by Rienk Prins on the right).

Each bacteria represents a treatment process that is supplied by Paques: Biopaq by black bacteria Andy, Thiopaq by green bacteria Theo and Anammox by red bacteria Ana.