IFAT 2018: Call on EU to develop standards for micropollutants in waste water 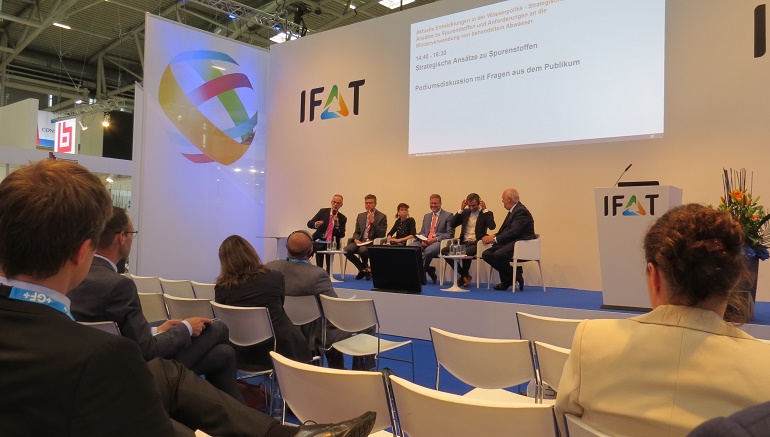 The call on the European Commission to come forward with a European wide policy on micropollutants and pharmaceuticals in the effluent of waste water treatment plants could clearly be heard at a special forum at the IFAT trade fair in Munich on 14 May.

Speakers from German, Dutch and French ministries shared their experiences on the development of a national strategy to prevent micropollutants from getting into the surface water and on how they engage all stakeholders involved, such as producers of chemicals, the pharmaceutical sector, hospitals, consumer groups, water quality authorities and water suppliers. 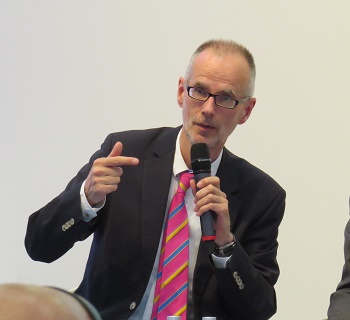 Jorg Wagner of the German environmental ministry explained that his government is working step-by-step towards waste water regulations for micropollutants.

Most speakers were convinced that in the end an additional treatment - a fourth step - at waste water treatment plants is inevitable, but at this stage it is difficult for water technology suppliers to develop new technologies as there are no national or European effluent standards for micropollutants yet.

Bettina Doeser, head of unit clean water of the European Commission, updated the forum on the latest water regulatory developments in Brussel. She mentioned that early next year the European Commission will announce its plans for the revision of the Water Framework Directive. Doeser did not go any further into the commission’s plans on micro-pollutants.

Step-by-step
At the forum the regulatory example of Switzerland was often mentioned. By national law 100 Swiss waste water treatment plants have been ordered to build a fourth treatment step and the first ones are now being extended with additional ozone filtration.

Germany, the Netherlands and France are clearly not yet ready for such legislation. The presentations made clear that the three countries are still in de middle of the process to talk with all stakeholders. ‘We do it step-by-step’, said Jörg Wagner of the German environmental ministry. ‘We are now in the process to operationalise our national policy strategy on micropollutants in two main elements: a new regulation for waste water and a publicity campaign’. 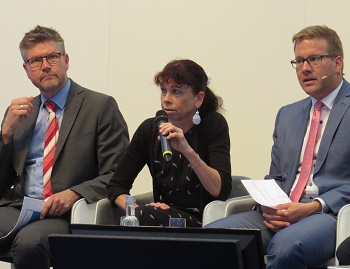 Marjan van Giezen (middle) of the Dutch ministry briefed the forum on developments in the Netherlands where the first fourth stage wwtp expansions are now being planned.

According to Wagner it is impossible for the national government to prescribe an additional fourth step for all 6,000 municipal waste water treatment plants in Germany. ‘The costs have been estimated at 50 billion euros that is a no-go for the current German coalition government’.

First achievements at hospitals
On behalf of the Dutch government Marjan van Giezen reported on the first achievements, such as special urine bags for patients to take home when they come from a hospital.

Van Giezen also told that some Dutch hospitals installed a Pharmafilter to treat their own waste water, including a membrane bioreactor and a digestor for biogas production.

In the Netherlands several treatment technologies have been piloted and the Dutch government has earmarked 30 million euros to contribute to regional water authorities if they want to upgrade their municipal wwtp-plant. 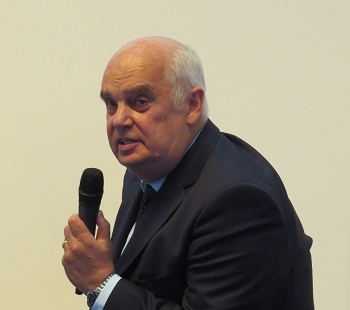 Professor Wolfgang Firk of DWA explained the complexity of the establishment of regulations for the removal of micropollutant sfrom wastewater.

Polluter pays
In principal all three ministries share the policy of the polluter pays. But in negotiations with all stakeholders, they find it difficult to pinpoint the polluter. Is it the supplier of the medicines, the pharmacists or hospital or it is the user?

Professor Wolfgang Firk of the German Association for Water, Wastewater and Waste (DWA) stated that the issue is complex. ‘In the nineties we had similar discussions about additional treatment for the removal of nutrients'. Firk recalled.

'The costs were a manifold of what we are now discussing for the removal of micropollutants. But nutrients only concerned phosphate and nitrogen which are easy measurable. European effluent standards could easily be determined and regulation was quickly introduced.’

Firk was sceptical on the introduction of regulation for the removal of micropollutants as it is still unclear what specific substances cause the highest health or ecological risks and should be prioritised to be removed first.

Read more on the participants at the Netherlands pavilion on the special IFAT-page on this website.

Stay tuned as news items on this website will keep you posted on the Dutch contributions to IFAT2018 during the whole week.

Ministry of Infrastructure and Water Management
The Hague, the Netherlands
+31 70 456 00 00
www.government.nl/ministry-of-infrastructure-and-water-management