"The large reactor tanks operate well and we have been able to maintain the specified granule sludge concentration at a levels up to 8 gram per liter", tells Marco Mijnders proudly at IFAT. Mijnders is responsible for the design and delivery of Nereda installations globally.

Sold in six countries
The presence of Royal HaskoningDHV at IFAT2014 is focused on their successful new waste water treatment technology that has been sold now in the Netherlands, Portugal, South Africa, Poland, Ireland and Brazil. 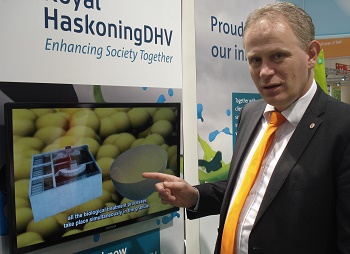 Unique granule, energy saving
Nereda is a biological treatment technology with a unique granular sludge that adjusts its function during high-oxygen and low-oxygen phases of the treatment process. One of the biggest advantages is its energy efficiency. Compared to conventional active sludge installations it uses up to 40% less energy.

Mijnders: "We have analysed the performance of our installations and see room for further optimizations.

Another advantage is the fast settlement of the Nereda granules, that can occur in the same tank in which the treatment process takes place.

Strict European effluent standards
According to Mijnders the strict standards from the European Water Framework Directive is in many cases a strong driving force for clients to decide for a Nereda installation. “We can reach very low concentrations for nutrients and a Nereda installation can easily comply with effluent requirements for treatment plants with a discharge on vulnerable water bodies.”

Mijnders acknowledges that in certain cases an additional treatment step may be necessary to meet certain effluent requirements. “But with a Nereda installation there is only a small gap to bridge.” 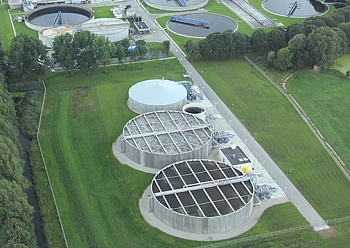 About Nereda
Nereda purifies water using the unique features of aerobic granular biomass. Nereda plants require a quarter of the area of traditional installations and it is entirely based on natural ingredients.

With a full scale Dutch Nereda wastewater treatment plant operating effectively for over two years now and many more planned across the world, it is clear that aerobic granular processing is set to become the new international standard in wastewater treatment.

Invented by the Delft University of Technology and developed within a unique public-private-partnership between the university, the Dutch Foundation for Applied Water Research (STOWA), several Dutch Water Boards and Royal HaskoningDHV, the technology revolutionizes wastewater treatment.

RoyalHaskoning is present at the Holland Business Pavilion (booth: hall 3 305/404)