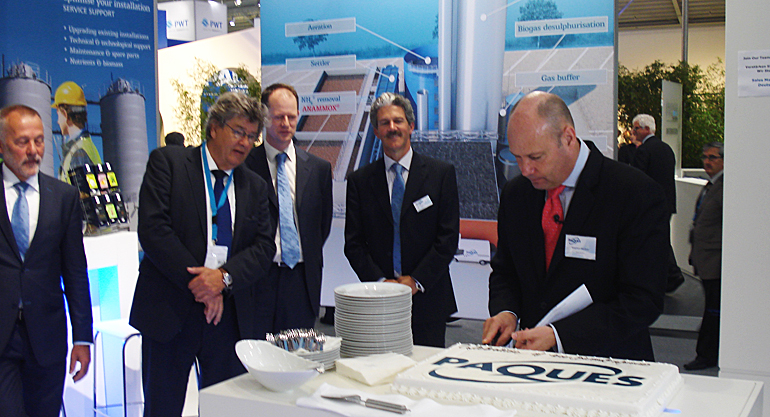 The customer is JBF Petrochemicals Ltd in India that purchased the installation to pre-treat the waste water from their purified terephthalic acid (PTA) facility.

The Biopaq IC installation – with a capacity of 66,200 kg COD per day - is now under construction and is partly manufactured at the recently started production facility of Paques in India. 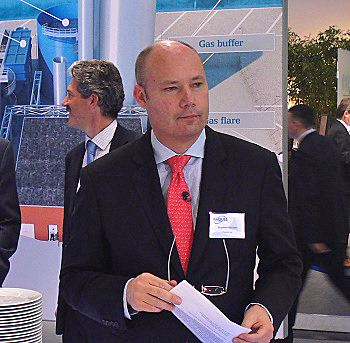 Proven highly reliable
CEO Stephan Bocken pointed out the IC-version of Paques anaerobic treatment systems matured since the first IC-plant was delivered to a Dutch chilled potato producer in 1987. "The treatment is based on an inner circulation of the biogas and needs no pumps. This makes it very reliable."

Bocken noted that many competitors have tried to copy the technology but never achieved the same performance.

The biogas that is produced in the lower part of reactor generates a gas lift that forces the water upwards through the riser. There is pump needed to mix the anaerobic sludge with the incoming waste water. 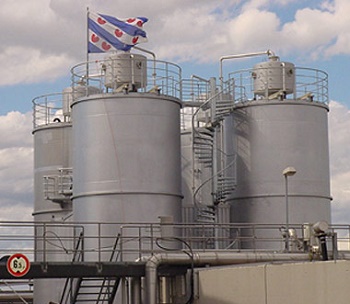 Smaller footprint
Founder of the company Jos Paques (second left on top photo) was also present at the IFAT-booth. He recalled the launch of the IC-technology and the delivery of the first installations.

Paques: "The reactor was taller and we were able to reduce the footprint of our then current UASB-versions. However, initially we did not dare to design the reactor to be wider than three meter as we feared disturbances in the lifting. Now the IC-reactors are designed as wide a 15 meter."

According to Jos Paques the anaerobic treatment of industrial waste water has become common. "There is hardly a paper mill in the world without an anaerobic bioreactor to treat its waste water."