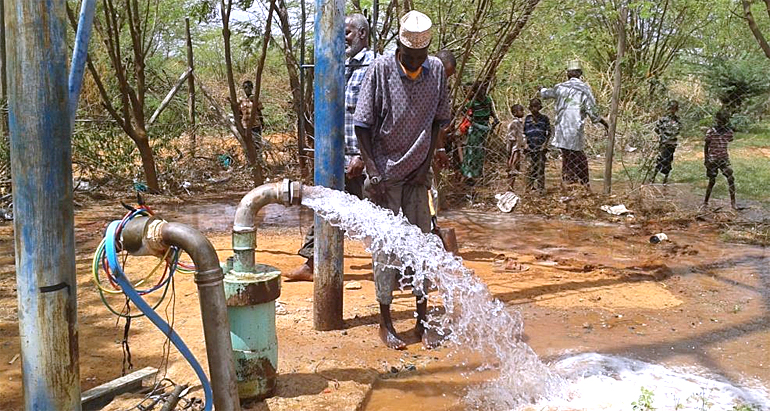 International groundwater centre IGRAC, together with consultancy Acacia Water, studied the potential of the Management Aquifer Recharge (MAR) in the transboundary Merti aquifer, shared between Kenya and Somalia.

The project was commissioned by the Intergovernmental Authority on Development (IGAD) of Eastern Africa. 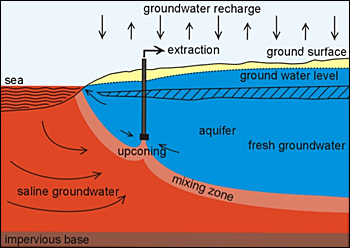 Danger of upconing of saline groundwater.

Based on the generated rainfall data series from satellite data and existing rainfall records, a rainfall outlook had been developed for future climate scenarios.

Climate change projections have been abstracted from existing climate change studies executed for the region. While the mean annual temperature in Kenya is projected to steadily increase up to 4.5°C by 2090’s, rainfall projections of mean rainfall are consistent in indicating increases in annual rainfall.

However, these simulations have shown large range intervals. Especially when range intervals become larger and more extreme, the MAR interventions can be a suitable solution for water security.

Most cost effective recharge
The use of MAR-tool showed that, although the Merti aquifer has locations that are suitable for deep groundwater recharge, it can be more cost effective to recharge the shallow regional aquifers.

Recharge of the deep aquifer will help to ensure inter-generational sustainability, but groundwater flow in deep aquifers is a slow process and interventions are not likely to have immediate effects.

Recharge of shallow aquifers, on the other hand, will augment the availability of fresh water, and will thereby minimize the need for exploitation of deep groundwater.

Recharge potential map
Shallow groundwater recharges that could be implemented in the Merti region have been compiled in the MAR suitability map.

In order to create this map and to give a sound recommendations with regards to the potential of the MAR, different methodologies were grouped based on their requirements on the physical landscape. 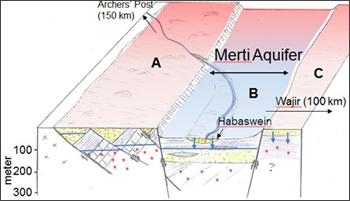 Anza Rift and Merti aquifer with saline southern fringes (A), Merti Aquifer (B) and the horst (C). Fresh water (blue) is found in the Central Merti Aquifer, flanked by saline water (red).

About Merti aquifer
IGAD had selected the Merti aquifer as it is one of the few reliable water sources in this semi-arid region.

Since the early 1990's there has been a significant increase in population due to the settlement of a large number of refugees from Somalia in the Dadaab area, which led to an increased demand for drinking water.

Close to half a million refugees live in Dadaab, Kenya and rely on four boreholes (see top photo) that deliver groundwater from the Merti aquifer.

Although the Merti aquifer is a vital source of fresh water in the region, still relatively little is known about the extent of the aquifer, its hydrogeological parameters and groundwater recharge.

This news item was originally published on the website of IGRAC.