The protocol of Delivery and Acceptance was signed on behalf of DCI by Mr YSR Murthy (see photo below).

The hand over was within the contractual delivery date. 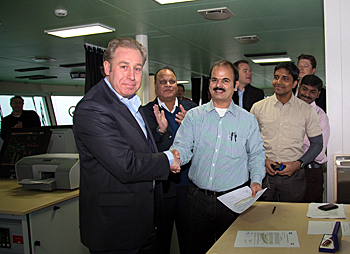 The vessels are capable of performing – among other tasks – maintenance dredging jobs on the Hooghly River, which is a tributary of the Ganges River in West Bengal.

DCI's dredging vessels will have the capability of delivering high productivity, reliability and efficiency, as well as low-power consumption and operational costs.

Timely deliveries
IHC Merwede designed, engineered and built the DCI Dredge XXI in The Netherlands. The company was selected on the basis of its reputation for high quality and the reliability of the timely deliveries of all other trailing suction hopper dredgers to DCI.

This news item was originally published on the website of IHC Merwede.