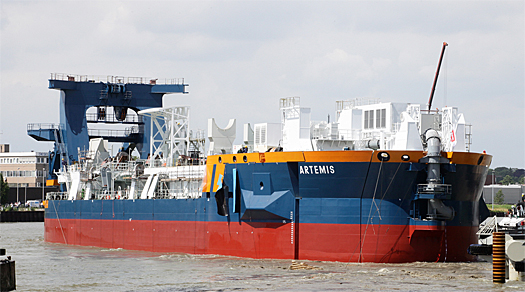 IHC Merwede has successfully named and launched the self-propelled cutter suction dredger, Artemis, in a ceremony on June 30th, 2012 at its shipyard in Kinderdijk, The Netherlands.

The Artemis, which is being manufactured for dredging copmany Van Oord, is one of the largest cutter suction dredgers ever built in The Netherlands for a Dutch dredging company.

The ceremony was performed by mrs A.B. van den Driest-Sorgdrager, who is the wife of Carel van den Driest, chairman of the supervisory board of Van Oord.

Delivery first half 2013
The contract for the design, construction and delivery of the vessel was signed between Van Oord and IHC Dredgers, part of IHC Merwede, on 20 December 2010. The ship will be delivered in the first half of 2013.

The name is consistent with Van Oord’s tradition of naming its cutter suction dredgers after legends in Greek mythology. Artemis is known as the goddess of the hunt.

As a result of the close cooperation between Van Oord and IHC Merwede, much attention has been paid to the ergonomic design of the Artemis. For example the deckhouse will be mounted on air springs to minimise noise and vibrations in the accommodation section.

Towards the end of 2011, her sister ship Athena, was delivered to Van Oord and has since been successfully utilised on various projects. The construction of both vessels is having a positive impact on the Dutch economy.

This news item was originally published on the website of IHC Merwede.