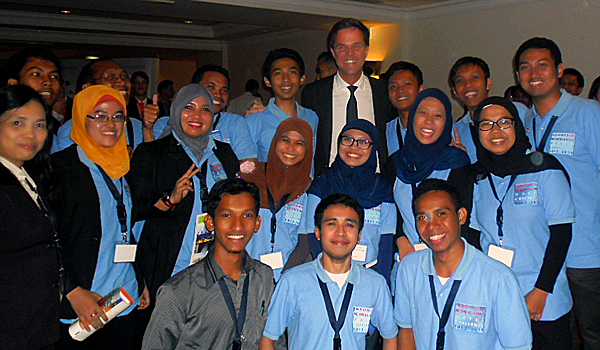 Students from Indonesian universities teamed up during the Indonesia-Netherlands Water Challenge and developed new ideas for the future development of Jakarta Bay.

The teams received a warm welcome during the Dutch trade mission to Indonesia led by Prime Minister Mark Rutte (mid back on photo) in Jakarta on 20 and 21 November.

Water & ports seminar
The Indonesia-Netherlands Water Challenge was officially launched during the Water & Ports Seminar where the teams were given strong encouragement by the more than 150 Indonesian and Dutch water sector representatives.

On behalf of the Dutch partners, Martin Smouter, Area Manager Asia of Van Oord, emphasized the importance of engaging young Indonesians with water challenges in their country and the value of exchanging knowledge between academic institutes and the private sector. 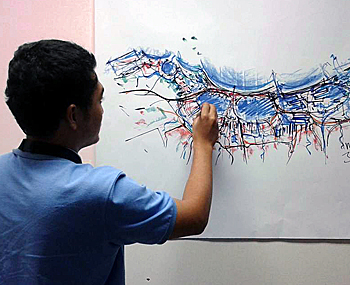 Foundation for new ideas
The 16 students who were selected after an initial call for papers in October, teamed up for two days with their mentor companies - BAM International, Royal HaskoningDHV, Van Oord and Deltares - to lay the foundation for their proposals.

Over the coming two months, the teams will further develop their ideas, taking advantage of expertise provided by the Dutch companies.

The final plans will be presented during the upcoming visit to Indonesia by Dutch Minister for water, Mrs. Melanie Schultz van Haegen, around March 2014.

Events have so far been organised in China, Singapore, the Netherlands and Australia.