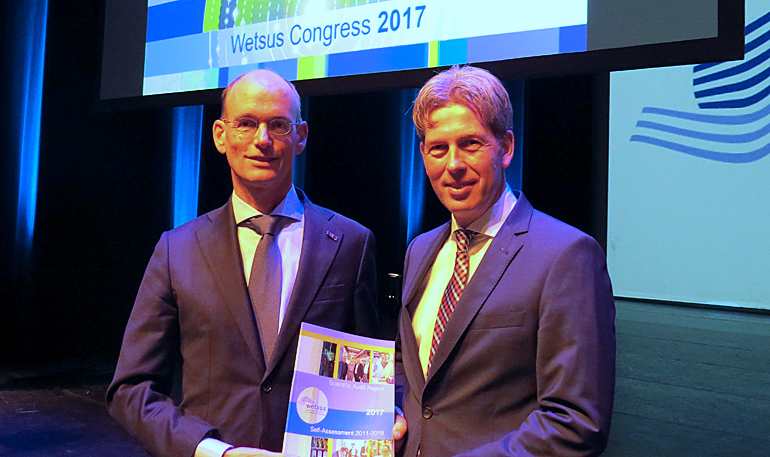 ‘One of the most influential and effective research units in the world in its field’. That is how the international audit team of four eminent scientists qualified the water technology centre Wetsus, based at the WaterCampus Leeuwarden in the Netherlands.

Their audit report was presented at the annual Wetsus conference in Leeuwarden, the Netherlands, on 9 October. One of the auditors, French professor Jean Fréchet, attended the conference and praised the unique research environment that has been created.

The audit report was proudly received by excutive board members professor Cees Buisman (left on top photo) and Johannes Boonstra (right). This evaluation is done every 6 years. 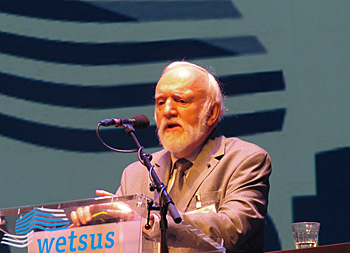 Unique model
Addressing the annual conference, scientific director Cees Buisman at Wetsus, referred to the unique model of his research institute and mentioned the recent achievements.

“We are proud on our extensive network that includes many universities from across Europe. Over 50 professors of these universities participate in our research programme and of which students do their multidisciplinary research here in Leeuwarden”, Buisman said.

Investment in research
The Wetsus network also involves over 100 companies that participate in the programme and to make the research more application-oriented.

Buisman: “Many companies have been with us for many years now. Apparently, it pays off to invest in their participating strategic research here at Wetsus”. 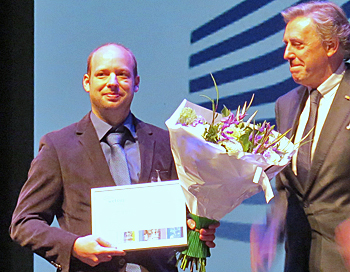 At the annual Wetsus conference, Philipp Wilfert (left) was awarded with the Marcel Mulder Prize for his research work to recover phosphate from high concentrated waste water stream by using vivianite minerals.

Four topics
The audit team assessed Wetsus on four topics. Next to its research qualities the team looked at the relevance of the research to society and the viability of an effective organisation.

Unanimously the team gave the highest possible score of 1.

On special request by Wetsus, the audit team also looked at how the institute’s network connects with its partners.

The team praised the interaction between the academic and industry partners. ‘Universities see Wetsus as a valuable extension of their interests, not as a competitor, while companies consider the network as a cost-effective platform to engage with key experts’ the auditors concluded.

This news item is based on a press release published on the website of Wetsus.