On 15 September the large Sand Engine measurement campaign MegaPEX 2014 started. The Sand Engine is a 128-acre artificial peninsula off the Dutch coast that has been created for an innovative way of beach nourishment.

Researchers Martijn Henriquez, Matthieu de Schipper and Sierd de Vries of the Hydraulic Engineering department at the Faculty of Civil Engineering and Geosciences, Delft University of Technology, have invited international researchers from various disciplines to join them in gathering new data on the behaviour of the Sand Engine.

Under the heading of MegaPEX 2014 the researchers will study the behaviour at locations both on the beach and in the sea, using various measuring methodes. The campaign will run till 27 October.

Changing its shape
The Sand Engine is a pilot project that started in 2011 along the Dutch coast. As an innovative way of beach nourishment, a huge volume of sand has been applied, creating an artifical peninsula. Wind, waves and currents are now spreading the sand naturally along the coast.

Gradually the Sand Engine changes in shape (top aerial photo in March 2014) and eventually it will be fully incorporated into the dunes and the beach. The coast will be broader and safer. 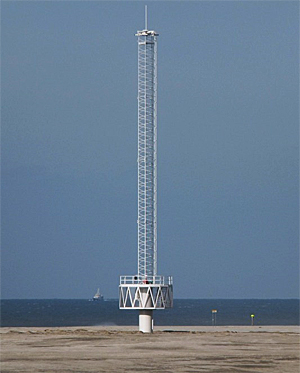 The Argus mast on the peninsula.

Measuring and mapping the change
Therefore our scientists are keen on following precisely how the Sand Engine develops. To do this, a project was started in which government, industry and research institutes cooperate. To ascertain whether the Sand Engine works as expected, its development is measured and mapped in different ways.

The research focuses on flow, spreading of sand, flora and fauna, swimming safety, dune development, groundwater and recreational use.

The data is continuously collected in various ways, amongst which by a radar installation, by depth and height with jet skis, through observations and assessments on the spot and with the Argus Mast.

MegaPEX2014
The MegaPEX 2014 campaign gives international researchers the opportunity to collect data and samples as well as share their data. For six weeks, the default measurement methodology 'on land, at sea and in the air' present will be expanded with extra equipment and scientists.

Examples are the unmanned helicopter (drone) which is used to measure the waves and currents and a comprehensive measurement set to count grains of sand bouncing under the influence of the wind.

In total, more than 20 different measurement setups will be realized to capture the behavior of the Sand Engine on a large scale and in detail.

The aim is to obtain insight into the feedback between coastal processes related to hydrodynamics, morphology, aeolian transport, dune formation, hydrology and ecology.

You can follow the progress of the MegaPEX2014 campaign on a special Blog http://megapex.blogspot.nl