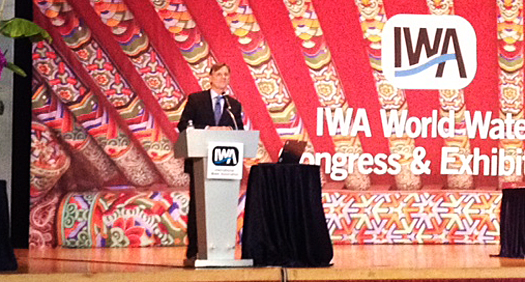 "The physics research community attracted huge publicity in the wake of the discovery of the Higgs particle this summer. Do we, as water sector companies and organisations, know how to get people fascinated about our mission?"

Attract attention to water solution
"We live in a world in which science is not self-evidently authoritative," said Wim van Vierssen. "We have to show that science helps mankind.. Another feature of this period is the growing pressure being placed on our planet. Problems like climate change, drought, urbanisation and environmental pollution can no longer wait for a solution."

Taking up the Herculean task
Van Vierssen sees the water sector is confronted with a Herculean task to make the use of waster recourses more efficient. "The sector itself is small and extremely fragmented, but it is also very curious, well organised and of vital importance. The question is: How can we ensure that the resource efficiency increases, so that, as the world population expands, we will still have enough clean drinking water for everyone?" 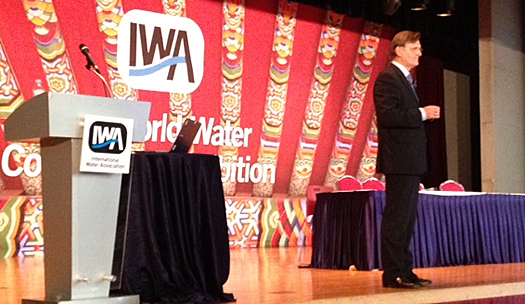 Domination by Anglo-Saxon countries
In his keynote Van Vierssen directly addressed the organizer of the world conference, the International Water Association (IWA). He advocated IWA to adjust its role as ‘régisseur’: “The more than 13.000 members hail from all countries and represent all disciplines. But take a look at their cultural background. Research by KWR and IWA shows that half of the members come from Anglo-Saxon countries. “

More involvement from utilities and governments
Van Vierssen: “We all talk to each other about innovation, but we sideline Asia, South America and Africa. Also, there are, relatively speaking, many scientists at the table, but few members representing utilities, governments and agencies. To attain a water resource efficient society we have to change our ways. That is our ‘Higgs’, that is what we have to attract attention to.”

About Wim van Vierssen
Wim van Vierssen made his keynote address, 'Collaboration in the water sector – do we need a Higgs particle?' on Thursday, 20 September, at 8:00 (local time), at the IWA World Water Congress & Exhibition in Busan, South Korea.

Professor Wim van Vierssen, who began his career in marine, brackish and fresh water management, is now CEO of KWR Watercycle Research Institute and a professor in Science System Assessment at the Delft University of Technology, the Netherlands.

He has developed major national research initiatives, is a former board member of the World Water Council and the PEER group, a collaborative framework of European Environmental Institutes. He is also chair of the Netherlands’ Climate Changes Spatial Planning program.

In July he became a member of the Steering Group of the European Innovation Partnership (EIP) on Water, chaired by Janez Potočnik, European Commissioner for Environment.
(read more: Three Dutch experts in high level EU innovation group on water – July 17, 2012)