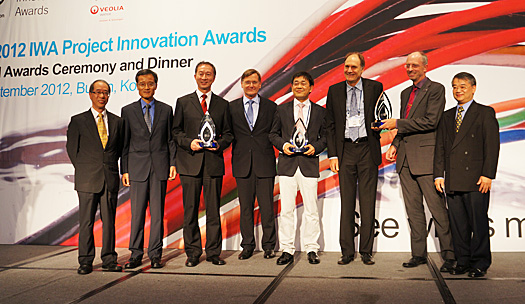 One of the winners was the demonstration plant Andijk of PWN Technologies with its innovative suspended ion exchange (SIX) and ceramic membranes (CeraMac).

The other winner was a pilot plant on the airport of Hong Kong where the University of Hong Kong uses seawater to flush toilets. The waste water is treated with the SANI Process, using sulphate reduction bacteria as developed in the Netherlands by the Delft University and KWR Watercycle research.

Both awards were handed out by director Wim van Vierssen of KWR watercycle research institute during the IWA World water conference on September 19th in Busan, Korea. 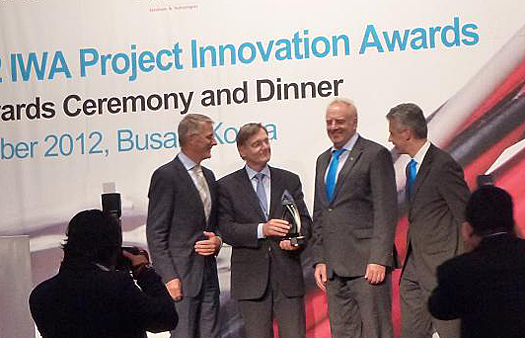 The demonstration plant Andijk III of PWN Technologies scored on the judging criteria of Innovation, Future value to the water engineering profession, and Sustainability. The demoplant is a pretreatment installation for the production of drinking water, integrating two new technologies that PWN Technologies developed based on suspended ion exchange (SIX) and ceramic membranes (CeraMac). SIX and CeraMac result in higher water quality, lower energy consumption and a lower environmental burden. 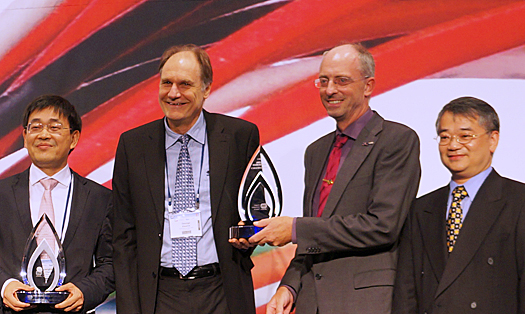 The use of sea water to flush toilets is not new in Honk Hong. It is the overall combination with a range of water and energy saving elements, that makes the water project at the Hong Kong Airport so special. The universities of Hong Kong (China), Delft (Netherlands) and Cape Town (South Africa) work together on this pilot, saving the airport 52 per cent of its freshwater demand and 30,000 MWh of electricity annually. Besides flushing the toilet with salt water, the seawater is used as a coolant in the air-conditioning system.

Sulphate and phosphorous from the seawater
During the treatment of the waste water with the SANI (Sulfate reduction, Autotrophic denitrification, and Nitrification Integrated) process, the sulphate in the seawater is used for new biochemical processes in the carbon and nitrogen cycles for the sludge production to reduce. Making use of the magnesium ions in seawater, the new technology recovers phosphorus from urine in the form of magnesium ammonium phosphate, a valuable phosphorus and nitrogen containing fertilizer, by mixing hydrolyzed urine with seawater.