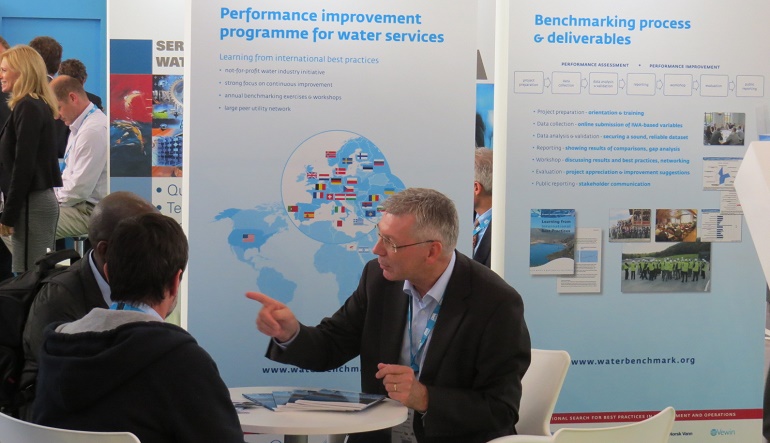 Two different ways for water utilities to know how they perform by means of an external assessment are presented next to each other at the Dutch pavilion at the IWA World Water Congress in Lisbon from 21-24 September.

The assessment itself is more or less the same, but the outcome is presented differently. Kiwa shows at their booth the Aquarating scheme that leads to a final score ranging from 0 to 100.

At the neighbouring booth, the European Benchmark Co-operation shows a scheme that leads to a benchmark comparing the performance to other water utilities.

Comparing performances
“We needed more fresh blood with more best practises of which our members can learn from”, explains managing director Peter Dane (top photo) of the newly formed EBC foundation. This summer Dane has been appointed managing director when the organisation became an independent foundation.

Previously the benchmark activity was a programme by the four national sector organisations from the Netherlands (Vewin – coordinator), Denmark (Danva), Finland (FIWA) and Norway (Norsk).

EBC started its activities in 2005 and now has 120 participating water utilities, mainly in Western Europe. Annually some 50 are benchmarked, based on the indicators developed by the International Water Association.

“By comparing their performances the utilities can learn from each other”, continues Dane. Specific areas that reveal interesting insights are leakages, energy efficiency and sludge handling.

Dane hopes that the independent status will lead to more water utilities joining the benchmark. 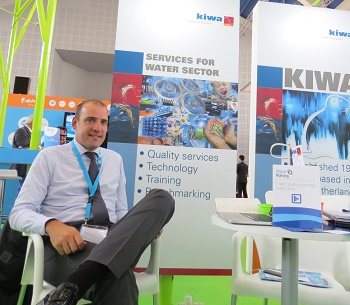 Although Aquarating is an initiative by IDB and IWA, Ramón Dolz Mollá of Kiwa is very much involved in the set up of this rating scheme.

Self-learning tool
Next to the EBC booth in the Dutch pavilion is the booth of Dutch accreditation company Kiwa, where Ramón Dolz Mollá enthusiastically tells about the Aquarating initiative by the International Water Association (IWA) and the International American Development Bank (IDB).

A recent pilot involving 6 Spanish and Latin-American water utilities worked well, according to Mollá. His company Kiwa was asked to do the audits.

“The audit includes some 400 checks. We wrote reports and gave the utilities a rate. Now they can improve their performance accordingly. It is a self-learning process”, says Mollá.

The audit scheme is also ready now and Aquarating is ready for its first real audits.

“This means that other accreditation companies can step in and, next to Kiwa, become an auditor too”, he adds.

The first certifications are expected early 2015.