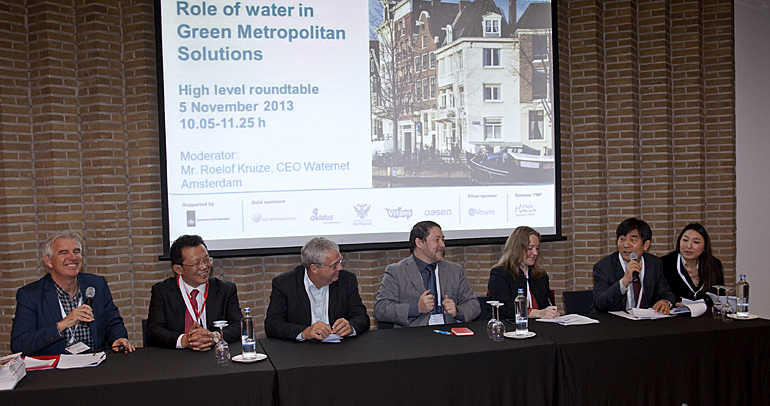 Zero water use in 2040 that was the message from director Roelof Kruize (left on top photo) of Amsterdam's municipal water company Waternet at the special roundtable session of C40 Cities climate leadership group during the International Water Week conference on 5 November.

According to Kruize the key elements for Amsterdam to achieve this water goal, are water re-use, rainwater harvesting and climate neutral buildings.

Representative from five cosmopolitan cities that participate in the C40 group, Amsterdam, Beijing, Paris, Casablanca and Seoul, talked about the role of water in integrated green urban solutions.

Huge expansion programme in Beijing
Striking at this roundtable session was the different situation of the water supply in Beijing and Paris. Director-general Pan Anjun (second left) of the Beijing Water Authority gave a briefing on the enormous expansion programme of the current water infrastructure. In the next three years 20 waste water treatment plants will be updated to meet the more stringent effluent standards. Additionally 14 new sludge treatment plants will be built as well as 47 plant to treat reclaimed water.

Water storage in Beijing's sewer Despite all the new build water infrastructure, including the construction of three over 1000 km long canals to bring in fresh water from Southern China, Beijing still foresees a water shortage in the near future.  Pan Anjun affirmed that Beijing is developing new plans for the storage of more water in its sewerage system and increase the water re-use from 228 million to 1 billion m3 per year.

Spraying non-potable water on streets of Paris
How different was the story by Bruno Nguyen, director international affairs of Eau de Paris. The number of inhabitant in the French capital has stabilized for many years and the water consumption is decreasing with 2% per year. To be able to meet its standards in the future, the water company has to develop new business and team up more with the surrounding regional authorities in the Seine  catchment area.  Paris is experimenting to cool down the city by spraying non-potable water on the streets.

Integrated solutions to reduce water and energy use 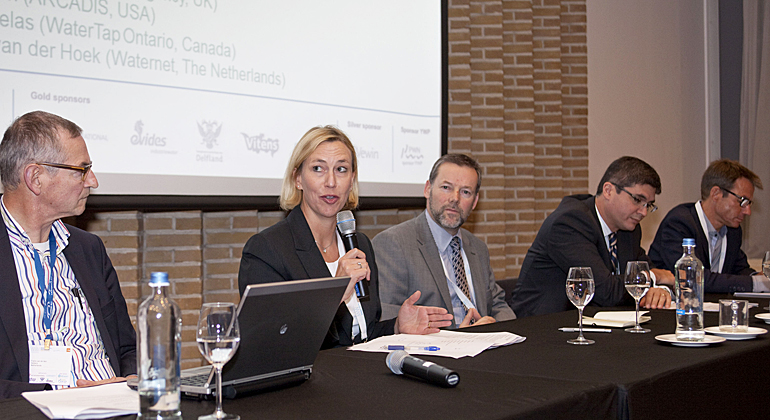 "Surface water is a giant heat collector and can act as a cooling system for a whole city. Why do we rather use electrical cooling devices?" This question was forwarded by associate professor of Urban Water Management Frans van de Ven (left on photo) of  Delft University of Technology, participating in the panel discussion during the workshop Cities of the future.

This workshop focused on new technical solutions combining the reduction of both water and energy use (water-energy nexus).

The panel discussion made clear that cities are facing a big water challenge and water scarcity will force them to keep the water longer in their cities. In general, cities have very little space for water so new ways have to be found to create more water storage capacity without claiming more room.

Urban harvesting
According to professor Jan Peter van der Hoek of Amsterdam's municipal water company Waternet, all large cities shall have to develop a strategy for urban harvesting.  "Urban water companies shall have to find strategic partners", he said. "And energy companies are an obvious choice as together they can get the utilities bill down for the citizens. The problem though it that the privatized energy companies work with a pay-back period on investments of only a few years. whereas the water sector is accustomed to periods of 30 to 50 years". 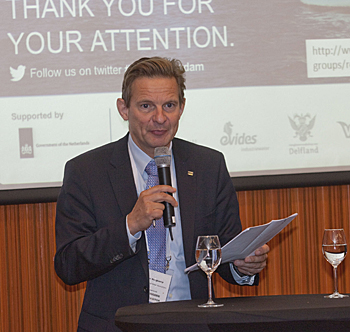 Jump on the bandwagon
Executive director Ger Bergkamp of the International Water Association who chaired the workshop, desperately asked why the shift to renewables proves to be so difficult.

"How come nobody jumps on the bandwagon if we can lower the energy bill with 40 percent?", he aksed in reaction to the remark by Van der Hoek that heat recovery from shower water has an enormous potential.

In many cities all around the world pilots are conducted with recovery of energy and raw materials from waste water but it proves hard to sell the recovered products.

The panel reacted quite frankly by stating that the price of water is too low and that consumers have little awareness of the looming water issues.

Three major events of the International Water Week are the international conference, the Aquatech trade fair on water technology and the Industrial Leaders Forum.

(all photos by NWP/Rob Kamminga)