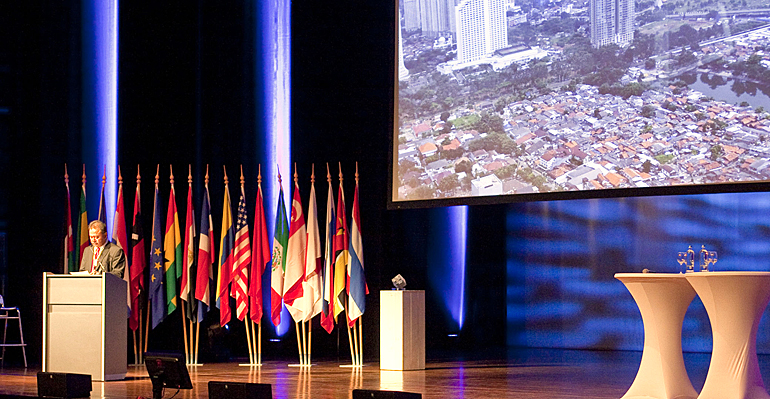 The 2nd edition of International Water Week and the 24th edition of Aquatech Amsterdam proved once again to be a major success.

Water technology trade fair Aquatech Amsterdam 2013 brought together over 650 exhibitors and some 18,500 visitors from the national and international water sector. 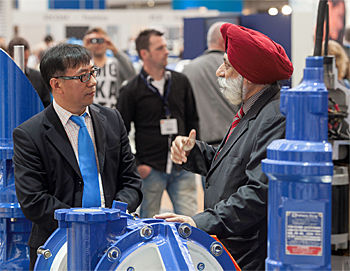 The 2013 edition of International Water Week Amsterdam and Aquatech presented itself as the ultimate platform for industry leaders and water professionals to network and find the latest innovative products, services, and technologies.

Bos adds: "We welcomed visitors  from 140 different countries and  60% of them came from abroad. Special delegations from 40 countries attended the event, with support from the Dutch government. The appreciation and trust expressed  by our exhibitors for the Aquatech formula is overwhelming. Despite the economic uncertainty already 30 percent of the show floor is rebooked for 2015." 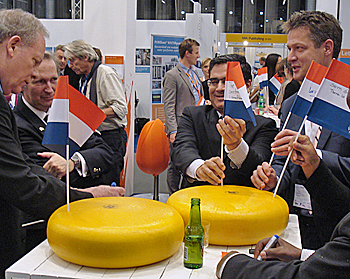 According to director Lennart Silvis of the Netherlands Water Partnership the event successfully focused on the question how to get things done. On how to facilitate the implementation of proven solutions.

"The international conference had many short presentations that connected science, policy and business. It was surprising to see that many solutions are already available, not only in the water cycle itself but also in relation to energy and food production", says Silvis
(right on photo).

Impressive opening
Some 650 visitors and high level keynote speakers celebrated the opening of the International Water Week and Aquatech Amsterdam. Amongst them were Prince El Hassan bin Talal of Jordan, chair of the UN Secretary-General’s Advisory Board. He addressed the Opening Ceremony of the International Water Week, highlighting that for many people around the world, water is a health hazard rather than a promoter of good health.

Dutch Minister of Infrastructure and environment Melanie Schultz van Haegen also spoke at the opening, commenting: "We have a responsibility to share experience, to save lives." The overall message of all keynote speakers was that the global water community must develop and implement integrated solutions.

Focus on industrial water use
In line with market demand, Aquatech placed a special focus on the industrial use of water.  One of the main programme elements reflecting this need was the Industrial Leaders Forum. Moderator Menno Holterman, the CEO of Nijhuis Industries, explains that 'for industry, water is becoming their licence to produce'.

Holterman added that during the preparations for the event, the captains of industry involved had unanimously proposed to send their sustainability directors, because all of the major water users are implementing ways to reduce their water footprint.

Rabobank’s Managing Director of Sustainable Business Development, Daan Dijk, noted that there is a significant latent demand for more money to implement water efficient technologies. He also outlined the need for a ‘hard-nosed’ approach to sustainability based on quantitative figures.

This news item is based on press release published on the website of AmsterdamRAI and Netherlands Water Partnership (Dutch only).