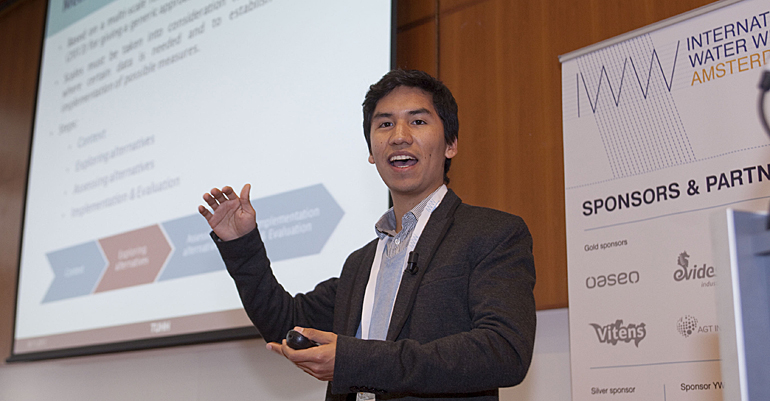 Urban water management seems to have reached a cross road. Continue business as usual within the silo of the water sector itself and find new ways to improve the urban water supply and waste water treatment as it is today. Or the water sector breaks out of the silo and fully engage in a new way of thinking about self-supporting cities with a maximum reuse of water, energy and materials. Two ways of thinking, two different worlds.

Both worlds met at the IWW conference on Integrated water solutions for a green economy that took place in Amsterdam on 5 and 6 November.

The conference was one of the major events of the International Water Week Amsterdam. It was attended by more than 1000 experts from 130 different countries.

Impressions of the conference 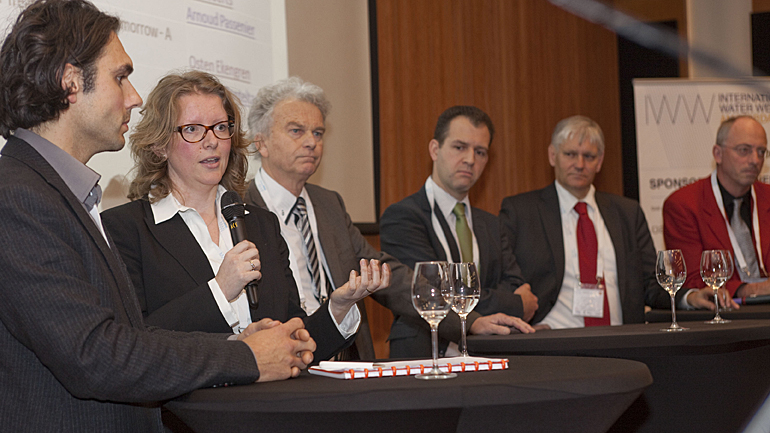 Mariska Ronteltap, lecturer on sanitary engineering at Unesco-IHE in a discussion on the possibilities to recover materials from waste water. Recovery technologies are piloted all over the world but it proves difficult to sell the recovered products for a good price. 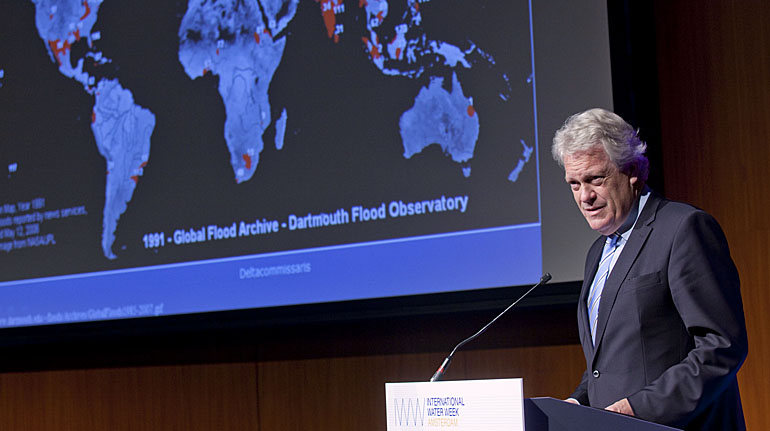 Delta programme commissioner Wim Kuijken of the Dutch government showed a map of areas in the world with severe flooding problems. He explained the complicated hydrological situation in low-lying densely populated river deltas. Climate change brings uncertainty and he advised to develop a long term strategy but only to take - no-regret - measures that are urgently needed. 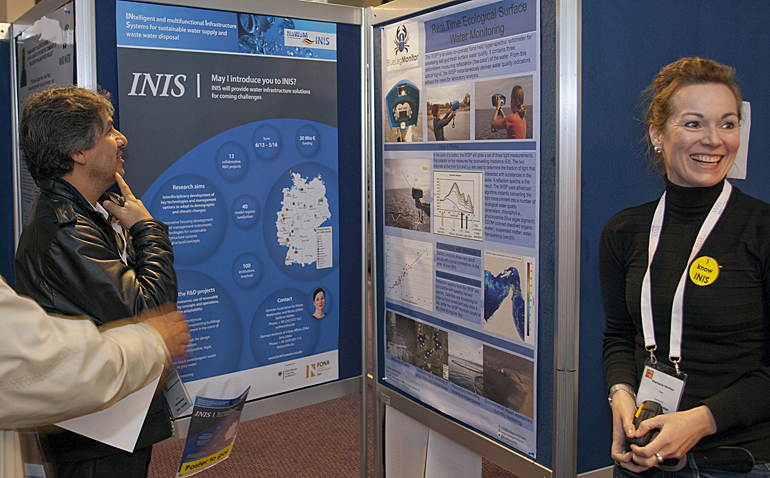 Over 200 poster presentations were sent fin rom all over the world and many were shown in Amsterdam during the conference, as was the poster from Stefanie Wolter (right on photo) of the German Association for water, waste water and waste (DWA), drawing attention to the Intelligent and multifunctional infrastructure systems for sustainable water supply and waste water disposal (INIS). 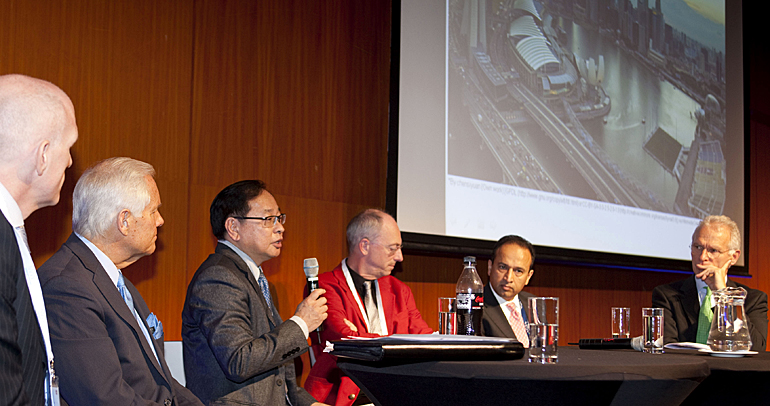 Deputy director Puah Aik Num of the Singapore national water agency PUB gave a keynote speech to start the second day of the conference. He told about the recent changes in the Singapore water supply and the many water technology innovations that have been realized. Singapore now uses multiple water resources for its fresh water, including rainwater catchment, desalination, waste water re-use. 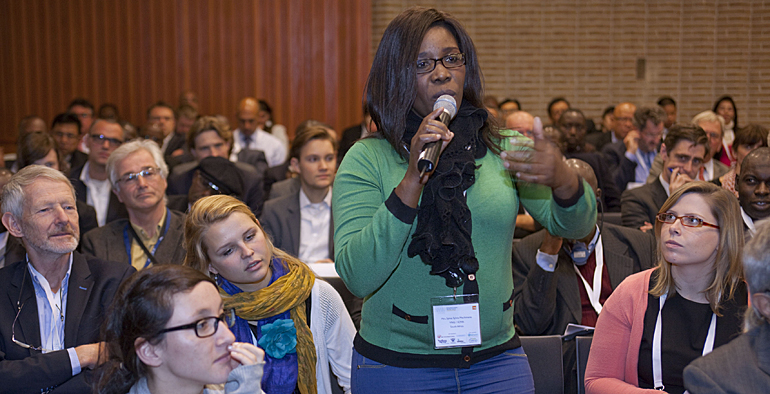 How come that only 4 billion people have a descent toilet, whereas 6 billion people have a cell phone? Apparently people rather spent their money on a cell phone then on sanitation. This amazing observation was heard in many discussions when it came down to water issues in developing countries. Many participants, as Sylvia Machimana of the South African Inkomati Catchment Management Agency (ICMA), asked about a more flexible payment system for water services. She referred to the 'pay and go' for South African television channels. It is important according to Machimana for people to have options to choose from. 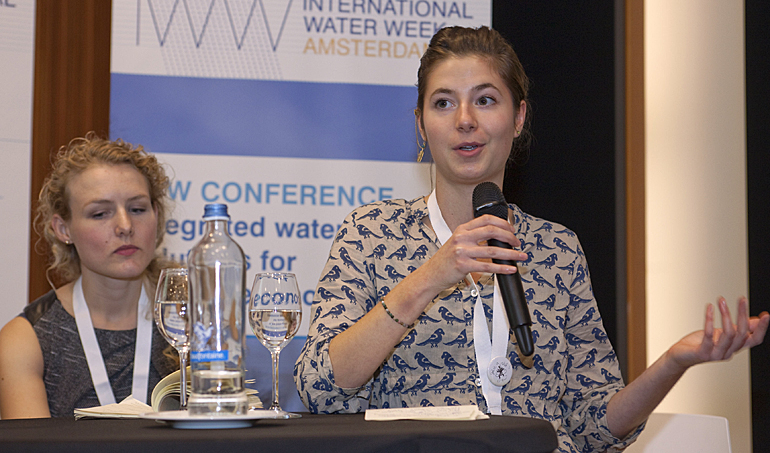 The conference was closed with the announcement of the new young IWW-conference ambassador. Sarah Dickin (left) told she wants to finish here study and introduced her successor Marie Sagen (right) from Norway. Marie Sagen could not have said it better to end the conference with its sometimes overwhelming water issues, than assuring the audience that we cannot do great things, but we can do small things with great love.

Three major events of the International Water Week are the international conference, the Aquatech trade fair on water technology and the Industrial Leaders Forum.

(all photos by NWP/Rob Kamminga)