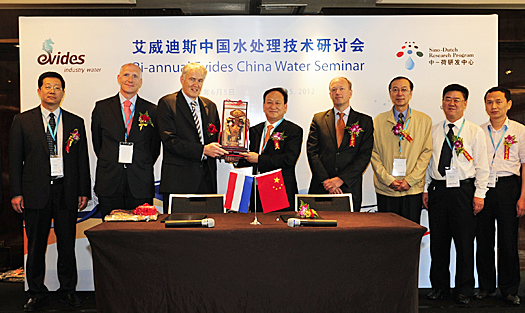 At the 2nd Evides China water seminar in Shanghai on June 4-5, director Markus Flick of Evides Industriewater announced a four month trail with a demonstration water treatment plant for the Chinese coal company Yankuang. During the seminar Evides and Yankuang signed a memorandum of understanding.

The ceremony marks the progress of the joint Sino-Dutch research on the purification of complex waste water from the chemical and coal-to-chemical industries.

Effluent upgraded to demineralized water
The new Evides demo plant will treat the effluent of Yankuang’s industrial wwtp at their Yulin location (Shaanxi province). The effluent will be upgrade for re use as demineralized water. The trail is to show that the treatment is economical viable and reliable.

Discharge standards and water scarcity
The factory is situated in a semi-desert area, where the largest coal reserves in China are converted into chemicals, fuels and olefins. This production is based on gasification of coal, and synthesis of a variety of chemicals. The gasification of coal leads to a very complex and toxic waste water. The treatment of this waste water is not only necessary to meet the discharge standards, but it is also necessary to allow the reuse of water is an absolute requirement since Northern China is very arid and water is very scarce.

Sino-Dutch research programme
The China Water seminar was attended by 120 experts from the chemical and coal-to-chemical industry to exchange their experiences on integrated physico-chemical-biological purification of complex industrial waste water.

The seminar was organized as part a cooperation agreement Evvides signed in November 2011 with the Technical University of Delft (TUD) in the Netherlands, the China-based National Engineering Center of Urban Water Resources of Harbin Institute of Technology (HIT) and the Provincial Academy of Environmental Science (PAES).

Life time extension for RO-membranes
During the seminar Evides Industrieweater presented the pretreatment of the waste water with its specially developed Airo UF membrane system reducing the energy and chemical consumption compared to classic RO treatment.

In Rotterdam this pretreatment is already operational in a demineralized water plant (1.400 m3/h). So far the experiences learned that in addition to the energy saving, the downstream RO-membranes last longer. A full report on the performance of this first full scale Airco-installation will appear later this year.

Under the terms of the agreement, Evides and the three educational institutions started a five-year Sino-Dutch research programme (SDRP), which will be funded by Evides.

Read more on the seminar on the website of Evides.