On the 14th of June 2016 the two Dutch start-ups FlexBase and Urban Wetlands and the Bangladesh ADT have signed a cooperation agreement.

In the short term the Dutch firms and their local partner under the name Amphidesh will build at several demonstration sites in Bangladesh. 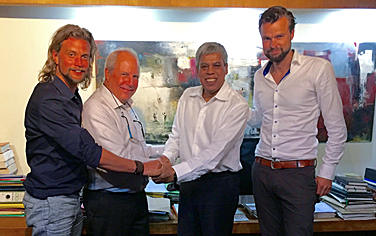 Floating structures
Bangladesh is a country that endures the consequences from climate change, one of which is the river bank erosion and the consequent loss of land and homes.

Jonas Pelgrom from Urban Wetlands says: “The rising sea-level and the rapidly melting Himalaya glaciers make life more difficult by the day for the 160 million inhabitants of Bangladesh.”

On which his associate Tieme Haddeman continues: “Resisting the water often seems a hopeless task.”

This gave FlexBase from Delft, and Urban Wetlands from Rotterdam, the idea to jointly deliver housing as well as drinking water and sanitation from a floating structure. 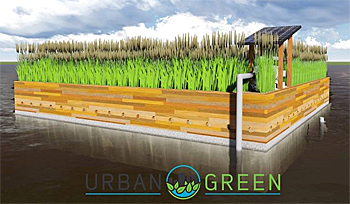 Impression of the floating water and sanitation facility that will be marketed in Bangladesh by Amphidesh.

Huge up scaling planned
Director Jan Willem Roël from FlexBase is very pleased with the progress: “The past 2,5 year we have worked hard to get this project afloat. Now that we have set up a local company together with a big project developer we can make the large strides which are necessary” according to Roël.

Supporting parties
Ben Lamoree of the Netherlands Water Partnership has closely followed this project and says: “Together with the Dutch Embassy and the Netherlands Enterprise Agency, we supported this initiative. Therefore it is very gratifying when the entrepreneurs actually come to a decision for investment.”

During the development and implementation of these innovations both companies worked together with VPdelta, a Dutch programme that supports startups in the development of concrete innovative solutions to tackle societal issues related to climate change.

Impression of the effects of climate change in Bangladesh and the increasing river bank erosion. French - Bangladeshi non-governmental organization Friendship started a floatable medical care service from a ship.