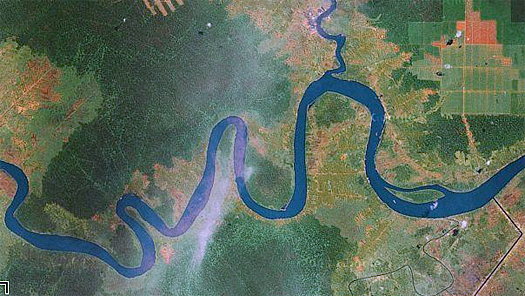 The Royal Netherlands Academy of Arts and Sciences (KNAW) has approved a collaborative Dutch-Indonesian project to study the hydrology and geomorphology of the Kapuas River system in Kalimantan. The project was developed by Ton Hoitink of Wageningen University. Hoitink was drawn to the area partly by its complexity, which has historically challenged and fascinated scientists.

Indonesia's largest river system
The Kapuas River of Borneo is Indonesia’s largest river system. Measuring 1,143 kilometres, it is also the world’s longest island river. Borneo, often referred to as the 'Asian Amazon', has been a favourite object of study for illustrious scientists throughout history. Charles Darwin called it ‘one great wild untidy luxuriant hothouse made by nature for herself’.

Complex geomorphology
The Kapuas River is characterised by a complex geomorphology and a intricate network of waterways and hydrological links with surrounding bogs and wetlands. "That makes it a tremendously interesting area for study, says Hoitink. ‘We can develop new methods of monitoring and modelling here, study sediment transport and river morphology, and enhance our understanding of the hydrological interactions between the river, the wetlands and the bogs.

Special style of meandering
Tropical rivers are very different from rivers in temperate zones, and are still relatively little understood. Their style of meandering tends to be especially remarkable. With just a glance at the course of the Kapuas River on Google Earth, the river’s strange pattern of behaviour become evident, with sharply-cornered segments intermixed with long straight sections. "More hydrological knowledge should allow us to better explain the geomorphology", says Hoitink.

Growing population in catchment
Next to the project’s scientific objectives, the initiative will have social relevance as well. Numerous oil palm plantations are being established in the area. These, in turn, have attracted growing populations which are settling in the Kapuas River catchment.

According to Hoitink: "Our project will strengthen the overall scientific basis of sound water and river management. That will hopefully put us in a position to help reduce damage caused by the drying out of the bogs and wetlands, and to curb the destructive effects of flooding and salinisation in the downstream lowlands."

Usefull models for spatial planning
Hoitink expects this will involve the planning of oil plantations and other agricultural activities in relation to sustainable water availability. "The models we produce will be useful for land use planning, for agricultural engineering works and for the development of ecotourism. Drinking water supply in the area will be an important consideration as well."

This news item was originally published on the website of
Alterra.