A new water resilient urban district between rivers and sea, that builds on existing natural and cultural-historical qualities of the City of Shantou. With this, KuiperCompagnons has won a shared first prize in the international design competition for Shantou New East Coastal Area in China.

The local Government of Shantou has requested design offices from three continents to create a design for an urban extension of 30 km2 before the coast of the city. KuiperCompagnons (Europe), Arup Asia (Asia), and NBBJ (North-America) have given their own content to this challenging assignment.

KuiperCompagnons has cooperated in this project with Paul Andreu Architecte Paris, designer of the National Grand Theatre in Beijing. 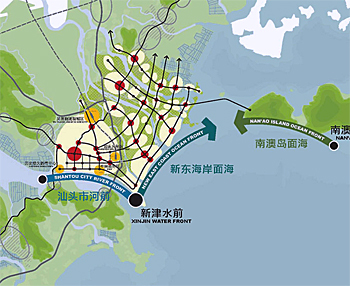 Typical urban development
In 1979 Shantou was declared a Special Economic Zone (SEZ), increasing foreign investments and trade in the city. The City of Shantou now has five million inhabitants and has developed towards a well known centre for trade and industry in the south east of China, in the Province of Guangdong.

However, in recent years the world has changed. In this new reality the characteristics of Shantou have become very suitable for a sustainable urban development.

A development that is not focused anymore on mass production and rapid growth, but rather on the individual, service and quality.

Restoring the relation between inhabitants and nature
Therefore KuiperCompagnongs has made the decision to take the existing (and sometimes largely forgotten) qualities of Shantou as base for the future development of the Shantou New East Coastal Area.

The relationship between the inhabitants of the city and the valuable natural environment of rivers, mountains and seas, and the rich history and Shao-Chinese culture were the starting point for the urban design.

Integrated flood resilience
Recent floods in Shantou underlined again the importance of water resilience in this delta environment. Typical Dutch water management is therefore an integral element of the urban design. Based on the Garden City approach with water as central element, a new city district is created with a clear and recognizable identity.

A flood proof Coastal Garden City. A city where people live together. Together with each other, and together with their natural and cultural environments.

This news item was originally published on the website of KuiperCompagnons.