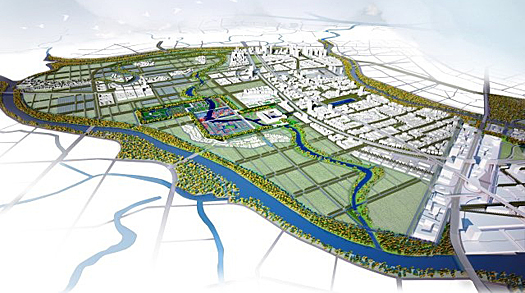 With speedy expansion of the horticultural industry, the current scattered and disorganized land use of the area has pushed back the nature and its eco system is severely polluted.

The Guangzhou Government is in search of a sustainable solution to the current problem in the era of rapid urban development. West 8’s winning entry provides the city a master plan with sustainable vision.

Partly wetlands area
The plan has the site area of 2,050 ha. (20.5km2), whereas more than 450 ha. is wetlands area. It consists of new living and industrial environments with ecological water system, wetlands, distinct division of land use zoning, urban planning with a highlight of cultural heritage and a design of an International Flora Expo Master plan which will function as a focal point and economic generator for the whole development. 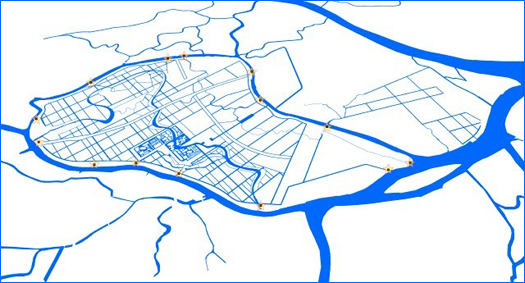 Ecological water system
The master plan vision starts with the introduction of an ecological water system network. Implementing this system will rearrange the land use structure on a large scale. It consists of the main ecological cleaning machine imbedded in locations, a Primary Water Collector System, Secondary Water Connector with Water Locks (Inlets/Outlets) and Tertiary Water Network of Small Scale Ditches (canals) which will be streaming along the gridline corresponding to the Guangzhou and Fushan cities historical axis, the Canton axis.

Flora expo
A Central Park will also be established by hosting the Guangzhou International Flora Expo in the first phase of the development. This Expo will be designed as a compact event. After the year when the expo takes place it will be transformed into a metropolitan park of Guangzhou: the Central Park of Huadi Island. 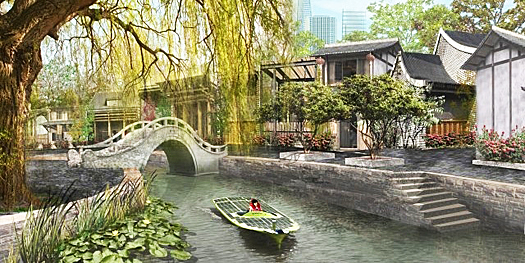 More about West 8
West 8 is an award-winning international office for urban design and landscape architecture, founded in 1987. Over the last 20 years West 8 has established itself as a leading practice with an international team of 70 architects, urban designers, landscape architects and industrial engineers. West 8's main office is based at the port of Rotterdam, and has two branch offices in Belgium and New York.

West 8's New York office was established after winning an international design competition for the design of Governors Island Park - a 172-acre island in the New York Harbor.