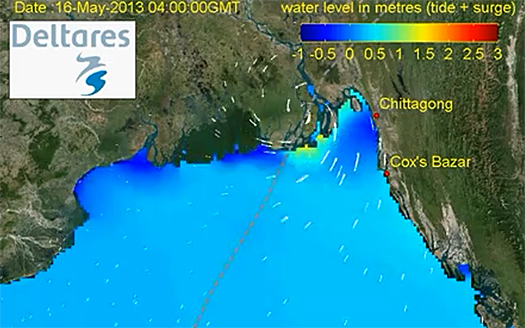 According to the latest model calculation by Dutch research institute Deltares the cyclone Mahasan will produce a storm surge of 1 to 1.5 meter along the coast between Chittagong and Cox-Bazaar. Earlier this week when the cyclone was building up over the Northern part of the Indian Ocean a storm surge of 5 meter was predicted.

Less wind speed
An explanation for this down-toned prediction is that the wind intensity has changed considerably. The early calculations were based on wind speeds up to 70 knots. Now it seems that wind speeds dropped to only 45 knots when Mahasen made landfall earlier today. Mahasan slowed down and changed from a cyclone to a heavy storm.

Hydrodynamic model Delft 3D
Most reports on cylcone Mahasan origin from weather stations that monitoring the complex on wind speeds, width and track. Deltares is one of the few institutes to monitor the cyclone’s storm surge.
The hydrodynamic model has been set up with Delft3D system running in 2D model.

Uncertainty over precise track
During the week different weather models predicted different tracks for the cyclone. Most recent forecasts show a track more to the north and resulting in the Deltares model to an even lower storm surge.
Deltares therefore notices that the model is only an indication. Rainfall and wave induced set-up are not included in this simulation.

Also read the previous news item on Mahasen on this website:
Evacuation to embanked shelters started as cyclone Mahasen approaches coast of Bangladesh and Myanmar, 15 May 2013