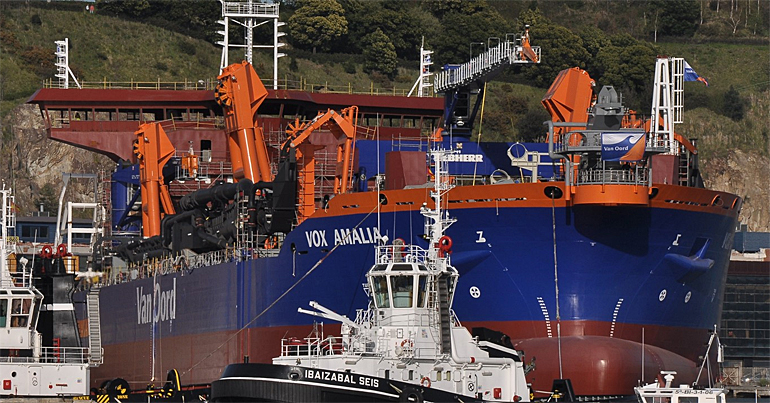 Van Oord’s new trailing suction hopper dredger, the Vox Amalia, has been successfully launched at the LaNaval shipyard in Bilbao, Spain on 29 March.

This dredger is the first of a new generation of dredgers with a low fuel-consumption, making the vessels energy-efficient and with a low CO2-emission.

Its twin, the Vox Alexia, will be completed early next year. Both ships are named after two of the daughters of King Willem-Alexander and Queen Máxima of the Netherlands: Princess Amalia and Pricess Alexia. 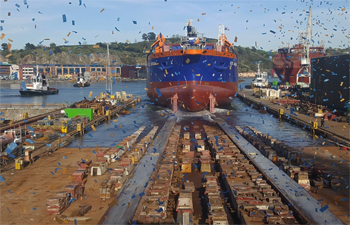 Ceremonial launch of the Vox Amalia at the shipyard in Bilbao, Spain.

Strengthening of hopper fleet
With a hopper volume of 18,000 cubic metres, the duo will strengthen the mid-class section of Van Oord’s hopper fleet.

The vessels are characterised by a large deadweight in combination with a shallow draft.

Both vessels are designed for capital dredging, coastal works and dredging of trenches for pipe and cable routes for offshore installations such as wind farms.

Energy efficiency
The propulsion engines and propellers will have the option of running at variable RPM and will therefore consume less fuel when sailing at lower speeds.

By optimising the shape of the hull, the vessels will have lower hull resistance, reducing the need for propulsion power without compromising sailing speed.

Yet, these vessels will be equipped with three engines rather than the two on board similar vessels. This will make it easier to match the supply and demand for energy during the various operation modes of these vessels among crew members.