The winners of the Lettinga Award 2017 are assistant professor David Strik, PhD researcher Mathijs van der Zwart and professor Cees Buisman from Wageningen University, the Netherlands, with their research on the possibility to grow plants on electricity in a anaerobic bioreactor using the nutrients from waste water.

The winning project was announced at the well-attended closing ceremony of the 15th World Congress on Anaerobic Digestions in Beijng, China on 20 October.

The Lettinga Award 2017 was sponsored by water technology suppliers Paques and Biothane, as well as the LeAF Foundation. 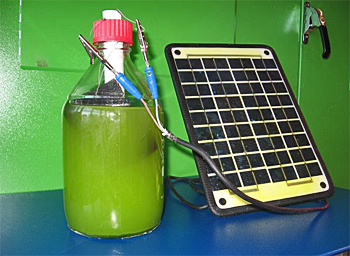 Lab scale anaerobic bioreactor (left) with algae that grows on electricity and nutrients from wastewater. The solar collector (right) provides the electricity to make the algae grow.

Growing biomass in the dark
The three researchers at the department of Environmental Technology of the Wageningen University wrote a project proposal, entitled ‘Dark photosynthesis: anaerobic biosynthesis of food from wastewater and electricity’.

The idea of the project is that by dark photosynthesis, food is produced in a bioreactor in a water and energy efficient way.

Dark photosynthesis is an idea in which photosynthetic micro-organisms, such as algae, are grown in the dark while an electrode provides the electron donor and conditions needed for growth.

By providing a nutrient rich wastewater, high value biomass can be produced which is in potential food of feed grade.

The winners of the Lettinga Award hypothesize that they can create conditions which will also allow growth in the dark. 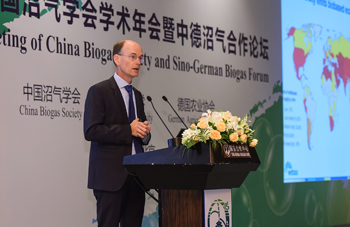 Professor Cees Buisman of Wageningen University received the award in Beijing - also on top photo - and in his presentation he talked about the role of water in a biobased economy.

Urine as nutrient
With the award the winners will experimentally validate their ideas and use real (diluted) urine as primary nutrient. In this way they expect to open new doors of research on anaerobic biosynthesis technologies which use wastewater as raw feedstock.

The project proposal reflects this year’s call for the award that was on using anaerobic technology for closing resource cycles.

The judges who evaluated the proposals came from the industry and academia and were guided by the following criteria: scope, innovation and impact.

Most potential
The winning proposal was characterized by the judges as ‘the one with the most potential’.

With the award they will experimentally validate their ideas and use real (diluted) urine as primary nutrient.

In this way they expect to open new doors on research on anaerobic biosynthesis technologies which use wastewater as raw feedstock.

Traditionally, the award is coupled to IWA Anaerobic Digestion congresses and is presented every two years.

This news item was originally published on the website of Leaf.