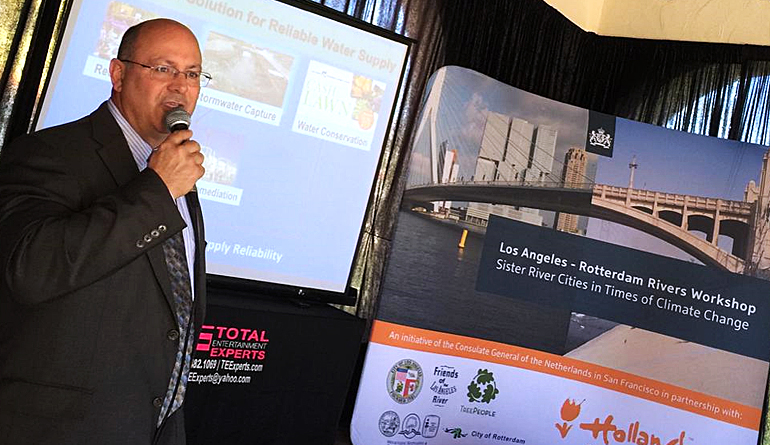 A Dutch delegation visited Los Angeles discussing the progress on greening urban rivers with their US counterparts at a workshop in Los Angeles on 12 February.

The meeting followed up on an earlier workshop in 2013 when US and Dutch experts engaged on Dutch innovative projects as 'Room for the river' and 'Building with nature'.

During this year's visit the mayor of Los Angeles, Eric Garcetti and the mayor of Rotterdam, Ahmed Aboutaleb, signed a River agreement to continue the cooperation on greening their rivers, the LA river in Los Angeles and the Rotte in Rotterdam. 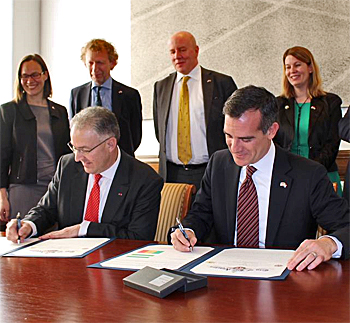 Floodable river forelands
Chief resilience officer Arnoud Molenaar of Rotterdam explaines that both cities face a similar challenge with their urban rivers. "We exchanged experiences with best practices in river restoration. Both cities are involved in projects greening their riverbanks by combining flood control and urban development."

According to Molenaar the workshop concentrated on projects that slow down the flow of the river and restore the river's natural capacity for flood control.

"We talked about floodable forelands in the river, using recycled materials such as mulch and wood. This has several advantages. It not only slows down the river flow, but also restores the river's natural habitat and improves the water quality". 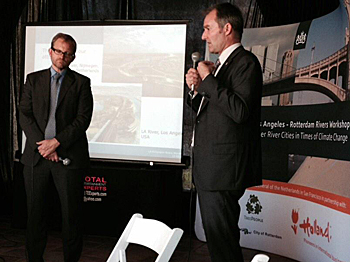 In a densly populated urban environment with many stakeholders this is a big challeng, Molenaar assures. "That makes it interesting for us to exchange our experiences, as was agreed by both mayors."

Capture storm water
The LA officials have become more interested in river restoration because of the serious drought in Southern California. Bone-dry periods raised the awareness for better collection of storm water.

Last month the Los Angeles Department of Water and Power (LADWP) presented an interim Storm Water Capture Master Plan, as was explained by its Senior assistant general manager Marty Adams (on top photo) during the workshop.

The plan is to contribute to the city's goal to reduce the amount of imported water by half over the next 10 years. 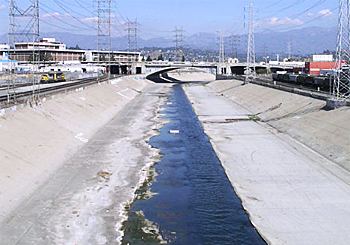 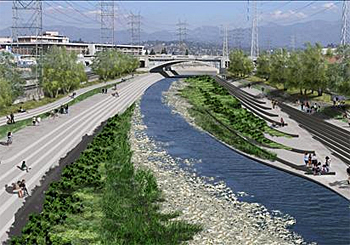 Impression of the LA river with floodable forelands.

Fourth drought year
Adams told that the Angelinos used nearly 21% less water in December than they did in the previous year. LADWP conducted a water conservation campaign urging the citizens to re-set their sprinklers to water their lawns.

LADWP provides water to 4 million residents heavily depending on the runoff from the Eastern Sierra. Recent surveys in these mountains show a record low snowpack only 25 percent of what's normal for the time of the year.

The water department anticipates a fourth drought year with a small run off to the Los Angeles Aqueduct and limited deliveries to the city.

Greening urban rivers
Several best practices on river restoration were presented during the workshop, both from Rotterdam and Los Angeles. Experts reported on the progress since the previous meeting in 2013 when working groups talked about involvement of residential communities and identified locations to create watershed functions.

Welcoming the Dutch delegation, the city's bureau of sanitation showed a video of several parks that have already been realised along the LA river with a combined function for recreation and water retention. According to general manager Enrique Zaldivar Los Angeles is slowly transforming into a green-blue city.