Loss of wetlands in Sahel linked to migration into Europe

Dutch-based organisation Wetlands International will release a publication in Brussels on 3 May that links the loss of wetlands in the Sahel region to increased social tensions and involuntary migration into Europe.

The foundation that strives for the protection of wetlands worldwide, has announced the launch of its report that is titled Water Shocks: Wetlands and Human Migration in the Sahel.

Devastating water infrastructure
In the announcement Wetlands International states that development schemes are undermining the livelihoods of some of the most vulnerable and poor inhabitants of the Sahel, due to loss and degradation of wetlands, whose productivity depends on seasonal flooding.

International funding is helping to build infrastructure for hydropower and irrigation schemes to meet growing energy and food demands in the Sahel Region. 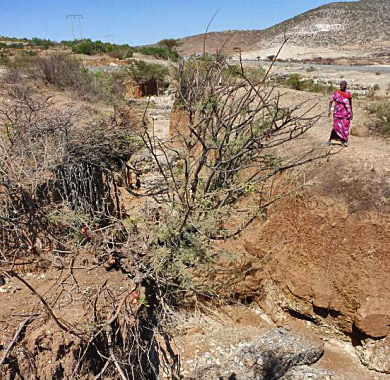 Example of ineffective physical erosion control interventions in Ethiopia. The Gabion dams widened the gully, while trees are still being cut.

Seasonal floods
The rivers, lakes, floodplains and deltas of the Sahel are highly productive and biologically diverse ecosystems, fed by seasonal floods. These dynamic wetlands have long shaped human culture and been the basis for local and regional economies.

Tens of millions of people still depend on the vitality of these water resources. But these natural assets are degrading, often due to ill-advised economic development projects which divert the water.

Such infrastructure can have a devastating impact on the fragile habitats of wetlands.

Take action
Wetlands International calls on decision makers at national and EU levels, development banks, and actors in humanitarian and development aid to take action, this new report highlights the connections between water management, wetlands and involuntary migration, including to Europe.

Authors, Jane Madgwick, CEO of Wetlands International and Fred Pearce, journalist, will present the report, along with a representative from the Red Cross.

On the occasion a panel discussion will follow, where high-level representatives will respond to the report’s conclusions.