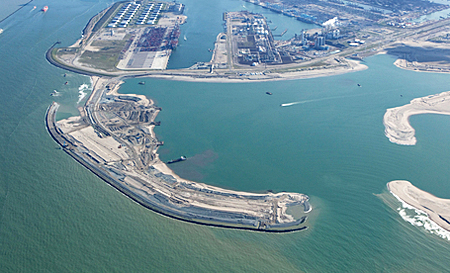 Construction of the hard sea wall that is to protect the north side of Maasvlakte 2, proceeds steadily. The ‘wet’ activities underwater were completed in November. In the meantime the specially constructed land-based crane, the Blockbuster, continues to work briskly on the block dam (black line on photo above) that will reach the mainland in mid-February. The coastal expansion project by the Rotterdam harbor is right on schedule.

Large scale dredging completed
PUMA - the joint venture involving Boskalis and Van Oord - started the Maasvlakte 2 project for the Rotterdam Port Authority in 2008. The first phase of the project encompasses 700 hectares of new land for the port.

In 2011 the large-scale spraying of sand from the sea was finished and the first 500 metres of deepsea quay were delivered. The new dunes were finished, roads and viaducts were constructed and work was done on the infrastructure for utilities. 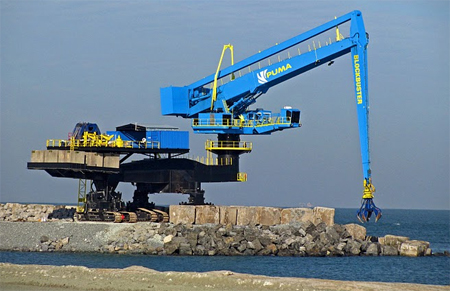 The Blockbuster crane is building the hard sea and is now reaching the main land.

In the second phase PUMA will build the quays, roads, railways and bicycle paths. The harbor basins will be deepened to 20 meters below NAP (Normal Amsterdam Level) so that even the largest container vessels can moor there.

Final closure from the sea
In April 2012 PUMA will deliver the hard sea wall which is part of a 11 kilometers long new coastal defense structure.

In July 2012 the gap in the sprayed sand dam will be closed, and at the start of 2013 the connection between the Yangtze harbour and the new port basins will be cut through.

Well over halfway
After three years of construction and less than two years until the first ship berths at the quay, the construction of Maasvlakte 2 is well over halfway. While 2011 was mainly concerned with distances and volumes, 2012 is the year in which everything comes together.

Construction of container terminals
The seawall will be closed and the infrastructure connected so that access for shipping can be opened via the Yangtze harbour. Both customers - RWG and APM Terminals - will be building their terminals in 2012 for occupation in 2014.

Maasvlakte 2 is the largest hydraulic engineering project in the Netherlands since the Delta Project and the construction of the present Maasvlakte.