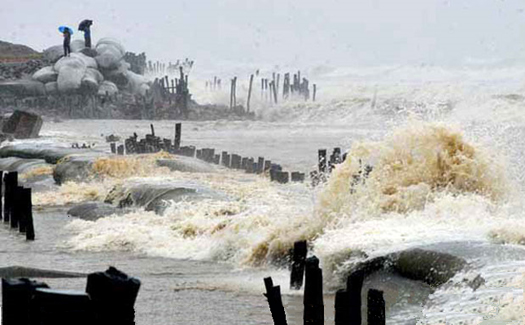 Lowering wind speed and a land fall during low tide prevented cyclone Mahasen to hit the coast of Bangladesh hard on the early morning of 16 May.

In the Mephan river delta a storm surge of 2 meter has been reported, causing some 20 chars to flood. Earlier when Mahasen was in full swing, a 5 meter storm surge was predicted.

Broken up over land Mahasen caused heavy wind guts and thunder showers. In and around the coastal cities of Patuakhali and Bhola thousands of thatched houses were destroyed and crops leveled. 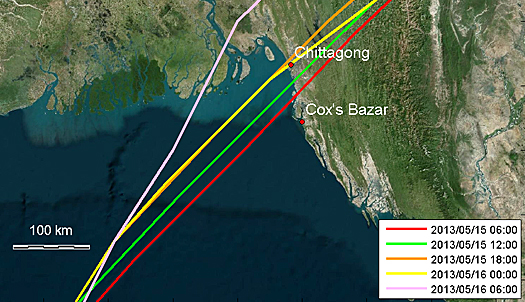 During the final 24 hrs before landfall at 06.00 hrs, the cyclcone’s track changed 100 km to the west (map by Deltares)

Just before landfall the cyclone changed its track some 100 km to the west. “That would have resulted in a higher tide in the Meghan river delta, if not for the landfall to coincide with the low tide”, says Maarten van Ormondt of the research institute Deltares.

Ormondt followed the cyclone’s track and made some simulations of the storm surge: “The surge lies somewhat right of the track and would have pushed more water up the funnel-shaped Bay of Bengal, and into the river delta. ”

Mahasen was predicted to head for the more eastern coastal city Chittagong. Here the cyclone had hardly any influence on the high tide. The tidal monitoring data of Chittagong the cyclone only shows up during the low tide. Because of the conjunction with the storm surge, the low tide was a little less than normal.

Mahasen made landfall in the early morning of 16 May some 100 km west of the coastal city of Cittagong where the low tide was a little less than normal.

Constantly changing storm surge
Mahasen showed how difficult it is to predict the impact of a storm surge. Changes in wind speed, track and conjunction with the high tide have a big influence. Mathijs van Ledden of engineering consultant Royal HaskoningDHV was involved in the activities during the aftermath of hurricane Katrina that hit New Orleans in 2005. He affirms the difficulty for emergency authorities to react to the constantly changing situation.

According to Van Ledden such a quick assessment is of crucial importance when it comes to taking preventive measures.

Also read the previous news item on Mahasen on this website:
Latest storm surge model for cyclone Mahasen shows less high tide then expected, 16 May 2013
Evacuation to embanked shelters started as cyclone Mahasen approaches coast of Bangladesh and Myanmar, 15 May 2013