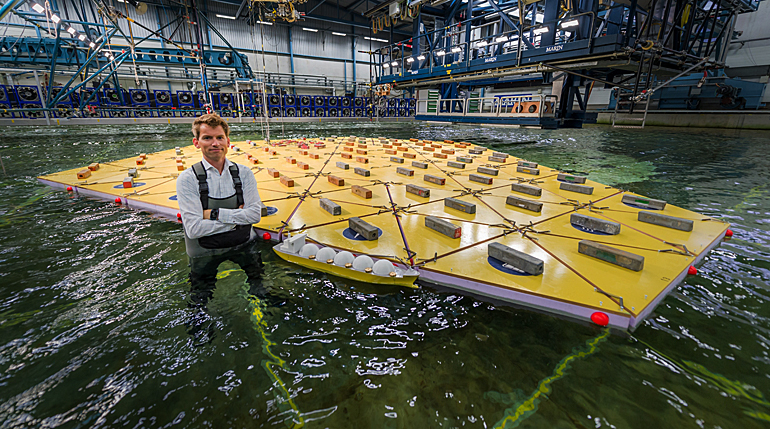 Maritime Research Institute Netherlands (Marin) revealed a new concept for a floating mega island. The institute tested the concept in one of its basins for offshore scale models.

The concept consists of 87 large floating triangles that are connected flexibly to each other. Together they form a flexible floating island that can reach 1 to 5 kilometers in reality for accommodating housing, ports, farms or parks on sea. 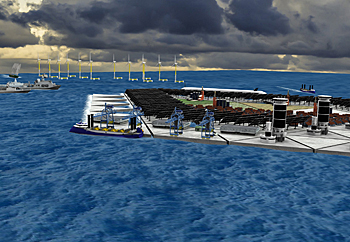 Impression of a real scale mega island that can function as a transhipment port, and generate renewable energy at the same time.

Best possible design
The 6x8 m sized model that is made of wood and polystyrene, was laid out on 12 July in the institute’s test basin to simulate the impact of wind, waves and storms.

Marin hopes to learn more about the best way to construct such an artificial island, such as the connections of the elements and its connection to the seabed.

One focus area is the ability on the island to generate and storing sustainable energy from offshore wind, tidal energy, wave energy and floating solar panels.

Increasing interest for floatable islands
Olaf Waals (on top photo), project manager and designer of the concept: ‘In a time of sea rise, overpopulated cities and an increasing number of activities at sea, raising dikes and spraying of sand may not be the most effective solution. Floating ports and cities are an innovative alternative that fits the Dutch maritime tradition.’

About Marin
The Maritime research institute Netherlands is a leading institute for hydrodynamic research and maritime technology.

It is a service provider for the shipbuilding and offshore industry and governments, incorporate simulation, model testing, full-scale measurements and training programmes.

This news item was originally published on the website of MARIN.

Video of the testing at MARIN of the scale model of a floating mega island.