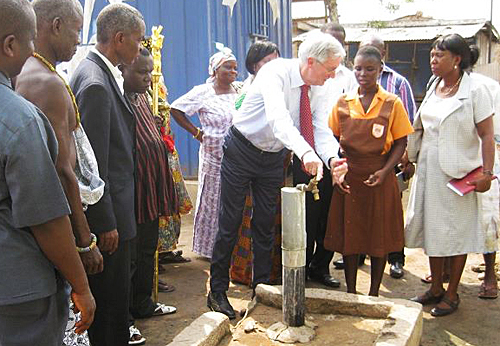 Dutch minister for development aid Ben Knapen visited Ghana and Benin on January 9 - 12. His visit was the formal start of the new Dutch policy for water aid. The Dutch government has reorganized its development aid, narrowing it to 9 countries and four focus areas, including water.

The aid policy will concentrate more on the economic potentials of the countries involved. In addition to the classical donation projects, the Dutch government favors the funding of bilateral public-private water projects.

Benin and Ghana are two of the countries to benefit from this new focus.

Knapen travel to Ghana and Benin to visit a number of water projects and see how Dutch know-how is used to provide clean running water to slum districts, achieve efficient water use in agriculture and to introduce integral water management to prevent erosion and pollution.

More public-private partnerships
According to minister Knapen, development cooperation can never be a government monopoly, particularly in the field of water supply. Public-private partnerships are to help out: in the coming five years, 150 million euros will be made available for joint water projects set up by businesses, knowledge institutions and development organizations.

Ghana: Ghana water sector to make first steps
"It is up to the Ghanaians to devise a plan that is sustainable long term without external financing", said Knapen in the capital Accra, when he discussed the new Dutch water policy with Ghana's vice president John Dramani Mahama. He spoke with schoolchildren, business people, academic researchers, and representatives of NGOs.

In 2010 the economy in Ghana grew by 14% in Ghana but still many people lack access to safe drinking water and sanitation. The Dutch government has made 100 million euro available for improvement of the water facilities during the next five years.

Benin: launch of Benin-Dutch water platform
During his visit to Benin, Knapen spoke in the capital Cotonou with prime minister Koupaki and the minister of foreign affairs about the political reforms and the future business climate. 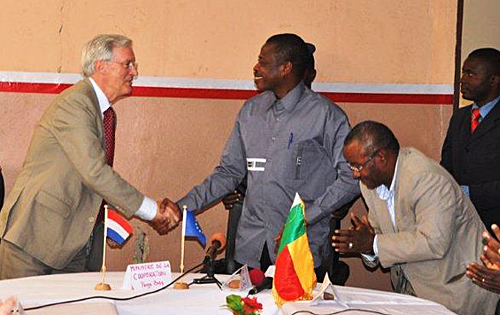 Signing of the agreement to form a Benin-Dutch water platform.

With the minister of water he talked about the possibilities to intensify the relation between the Benin and Dutch water sectors. Both ministers agreed to form a special Benin-Dutch water platform.

The platform is scheduled to have its first meeting in March.

Tailor made projects
Director Lenart Silvis of the Netherlands Water Partnership (NWP) who joined the visits of minister Knapen to Ghana and Benin, expects the new Dutch aid policy to generate water projects that will address better the local needs.

"We agreed that Dutch water experts are to meet their Benin counterparts frequently and talk strategically about the water related problems. If necessary they can propose ideas for pilot projects to improve the water supply in rural areas or to improve the capacity for integrated river basin management”, says the NWP-director.

The Dutch government has earmarked 30 million euros for the next five years as seed money for PPP’s in Ghana.”

Two videos on the water situation in Benin (in French/local language). Local villagers and water authorities explain the current situation and express the need to change the water services to better meet the local demand for drinking water, waste water and sanitation.